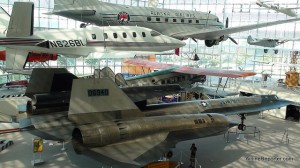 Alaska Airlines DC-3, Lear Fan 2100 hang from the ceiling, while an SR-71 and United Airlines Boeing 80A-1 hang out on the ground at the Museum of Flight

Over the past ten years I have (almost) consistently lived no farther than 30 miles away from the Museum of Flight (MoF) at Boeing Field in Seattle. However, I haven’t visited once in that last ten years. Being so close has been the problem. I have always thought, “well, I can go next weekend,” but I haven’t. I took such a wonderful aviation museum for granted and never went to re-discover what they have.

Well, I got sick and tired of hearing about all the cool new things they have and decided to go check them out myself. I was lucky to have Ted Huetter, Public Relations and Promotions Manager, show me around the place. Ted might work in PR, but there is no question he is an aviation nut and knows his stuff!

Last time I visited the MoF, they had a bunch of hanging airplanes (which don’t get me wrong are cool enough) and the old red Boeing barn. Today, not only do they have all that cool stuff still, but also their airpark, World War I and II displays and lots of nifty space stuff. 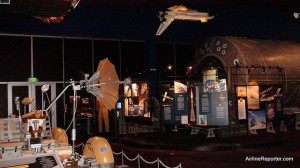 Lunar Rover on the left. Space station module on the right. Awesomeness all around.

The MoF started in 1964 when a small group of people set about wanting to maintain the history of aviation. The first aircraft obtained was displayed in the Seattle Center, where the Seattle Worlds Fair occurred in 1962. In 1975 the Port of Seattle leased the land the museum is currently on for 99 years (so better hurry before 2074). The Red Barn, which is the birthplace of The Boeing Company, was saved from demolition on its original location on the Duwamish River, and floated by river-barge to its current location.

The museum has a mission to “acquire and conserve a valuable collection of artifacts relating to air and space history and technology.” But they also want to ensure that the public can get access. This is a difficult mixture, since people are destructive. Not just the hooligans who literally cause damage, but just breathing and touching items or even air and sunlight can be very destructive over time. It is a hard balance of what aircraft to give patrons access to versus which ones must remain off-limits to keep them in tip-top condition over time. 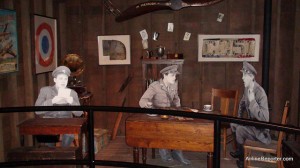 The Personal Courage Wing had much more than just airplanes. Really makes you feel like you travel back in time.

Even before I was able to make it into the lobby I was presented with eye candy outside. First they have a few aircraft on display, second you are right on Boeing Field, where the new test Boeing 787 Dreamliners and Boeing 747-8Fs are being housed, and lastly there were three Boeing 737-800 fuselages that were sitting on a train just outside the museum coming from Kansas and on their way to Renton, WA to be assembled.

After making it into the lobby you not only see aircraft hanging from the ceiling, but a vast gift shop with lots of great aviation related items (Even though Visa really wanted me to visit, I stayed away). They also have a theater off the lobby with great short movies, that you could probably just sit and watch all day without going through the rest of the museum.

When you first walk into the main “admissions only” area, you can’t help but get goose bumps. There are so many amazing aircraft hanging from the ceiling and on the ground for you to check out. From the SR-71 Blackbird to a DC-3 with Alaska Airlines livery. If you like aviation, you are going to love the collection of commercial and military aircraft they have on display. 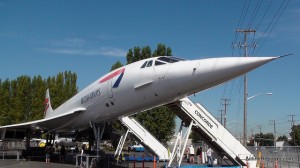 Off from the main floor is their Rendezvous in Space area and what a cool section. From a lunar rover to a full mock-up of a space station module that you can go inside of. The module is very interesting because there is no obvious “up.” Since there is no gravity, there is no floor and the signage for the buttons reads in different directions.

The way they have the area set up, it really puts you in a space-like setting, which makes the experience all that much more enjoyable. The museum is currently working to bring one of the space shuttles to their facility. You can sign a petition or donate to help their efforts and help Seattle get a Space Shuttle — and what city wouldn’t want to get a Space Shuttle?

After checking out Rendezvous in Space, it was off to the Personal Courage Wing that looks at the history of World War I and II. This is a new addition to the museum with two stories of history. They not only display amazing aircraft from both wars, but also share much more history about the time period and really put the aircraft into perspective. Even if you don’t like airplanes, but enjoy history, you will love this section of the museum (double bonus if you like both). 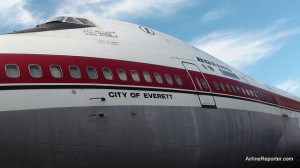 You are able to walk around the first ever Boeing 747, the City of Everett

My guide, Ted, told me that people always ask why World War II aircraft are downstairs (where you enter) and WWI are upstairs. He explained that it was all about weight. The aircraft from the earlier time period were much lighter than those from WWII, having it make more sense to store the lighter aircraft upstairs.

Now, it was time to head outside to their airpark to check out some pretty sweet airliners. First we went inside British Airways Concorde (G-BOAG). This was my first time inside a Concorde and it looked brand new still. The windows were super small and it was a little cramped, but not as bad as I expected. You are able to see in the cockpit and the few hundred fuses they have on the wall.

Having one of the remaining super-sonic airliners that is in such great shape is pretty exciting. Upon exiting, it was time to check out old Air Force One 707-120 that replaced Eisenhower’s Super Constellation. Ted explained that flight engineers, who used to work on the plane, recently came for a visit and they said the plane smells exactly the same as it did back in the day. Now, that is preserving history! 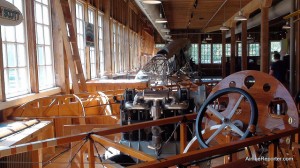 Inside the Boeing Red Barn at the Museum of Flight

Even though the Concorde and Boeing 707 are in pristine condition and you can go inside, the jewel of the airpark (in my opinion) is the first Boeing 747 (N7470). It is named the City of Everett after where it was built at Paine Field, located in Everett, WA. It first flew on February 9, 1969 and later served as a testbed for 747 systems improvements and new engine developments for other Boeing commercial jets, including the Boeing 777 engine program. She is not in the best shape, but that is something the Museum of Flight hopes to work on.

If you are into researching about planes, the MoF also has a public archive and library that you are able to visit. If you are in the Seattle area on October 9th or 10th, make your way to the Library and Archives Building, because they will be having a sale of a bunch of old aviation related books and other goodies.

There is so much more to explore at the MoF, an aviation nut could easily spend a few days there. For those of you who are local, it might be time to re-discover the Museum of Flight. For those of you that don’t live in the Seattle area, make sure to put this on your “must do” list and if you love aviation, you have to make it out to Seattle sometime to check out all the cool things we have to offer.