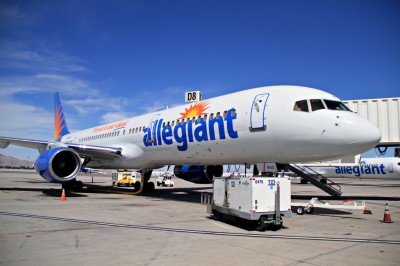 Allegiant Air has gained approval from the Federal Aviation Administration (FAA) to start operating the Boeing 757-200. Today the 757 (N902NV) will start service between McAllen-Miller International Airport (MFE) and Las Vegas (LAS). You might have to be a true airline nerd to appreciate an airline starting to use a new aircraft type. I have enjoyed following Allegiant Air’s acquisition of Boeing 757s, see the re-painting, to seeing one in the buff getting its interior installed at Paine Field.

’œThis is an important day for Allegiant,’ Andrew C. Levy, Allegiant Travel Company President, said. ’œThe addition of the Boeing 757-200 will play an important role in our company’s future growth. Our operations team worked long and hard to ensure the completion of this certification and we thank them for their dedication in achieving this important goal.’

It is unlikely that the Boeing 757, configured with 217 economy seats, will remain on the MFE to LAS route, since the airline is hoping to initiate service to Hawaii, Mexico and Canada via Las Vegas and Orlando. The city and airport are pretty excited about the Boeing 757 that they made a video highlighting the new aircraft coming to the airport on YouTube.