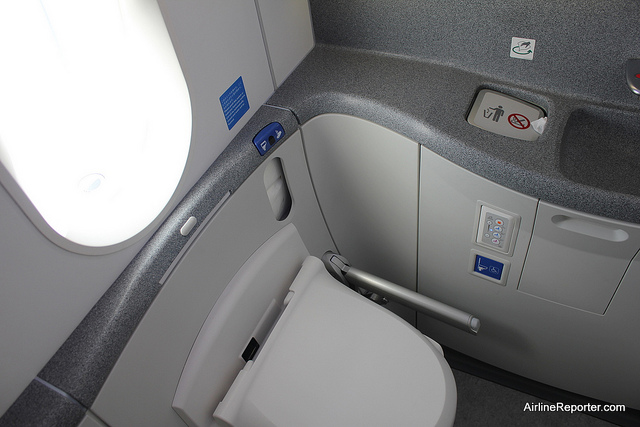 Lavatory on an ANA Boeing 787

The last thing I wanted to do was break my wife’s arm, but that’s what happened as I tried to get her through the narrow door of the plane’s lavatory. It wasn’t intentional of course, but there is not enough room inside for a helper and a disabled person to be in the  lavatory at the same time. So rather than stepping in first and safely pulling her in, I tried to move her in backwards. That turned out to be a big mistake.

We learned the hard way. The lavatory door had the ’œwheelchair accessible’ symbol. One would have thought it would at least be safe, albeit inconveniently narrow. However, the little on-board wheelchair (a.k.a. aisle chair) wouldn’t fit through the lavatory door. What was to be a relaxing and fun vacation with friends in San Antonio became instead a five-day stay at a Texas hospital for my wife. We have learned that life with a disability means we continually make adjustments. Sometimes the best laid plans can go astray.