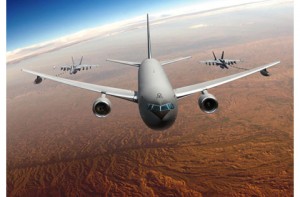 The United States Air Force has announced today that they have granted the tanker contract to Boeing and their 767 aircraft, which will be called the KC-46A. The Air Force is asking Boeing to deliver the first 18 aircraft by 2017.

This has been a heated battle between Boeing and EADS (the parent company of Airbus) for the contract worth $35billion dollars and 179 airplanes. Currently the Air Force has about 400 KC-135s currently used as tankers.Back in 2008, the Air Force initially gave the deal to EADS and their partner at the time Northrop Grumman. Since there were complaints about the bidding process, the whole process had to be started over again.

The Boeing 767 will be built in Everett, WA and modified for tanker duty in Wichita, KA. Washington representative Norm Dicks told Glenn Farely of KING5, “I am so excited that we finally won this after three go-arounds. It’s just the most important victory for Boeing, for the workers of our state.”

Although the decision has been made, it can still be appealed. At this point, I hope it does not get appealed so our troops can start getting new aircraft.