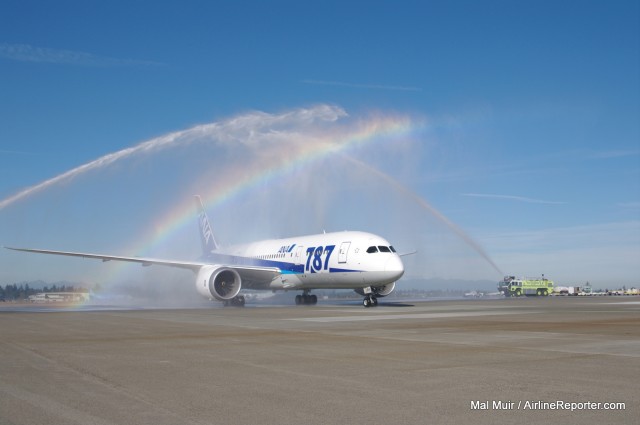 This story was written by AirlineReporter.com correspondent Mal Muir…

Even though the Boeing 787 Dreamliner has been flying the skies commercially for almost a year now, its route network has been limited.  The majority of  flights are made up of Japanese domestic routes operated by ANA, but that is quickly changing. Yesterday one of their 787 essentially ’œreturned to its home,” during the inaugural Narita (NRT) to Seattle (SEA) flight. 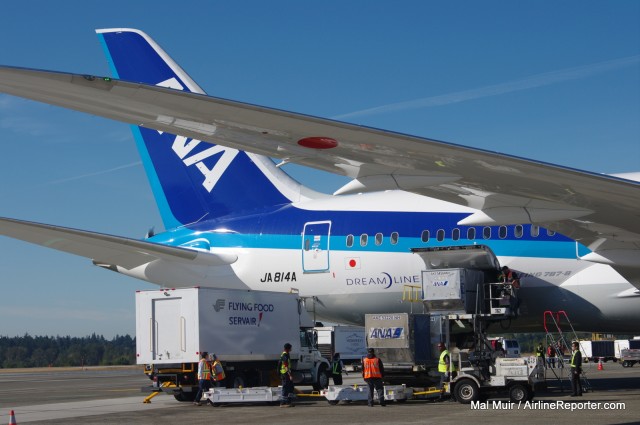 When ANA’s first Boeing 787 was delivered back in September 2011, it was a rainy day in Seattle. Yesterday was almost the total opposite with the sun shining and Mount Rainier prominently on the horizon. The airport has seen a 787 Dreamliner visit before, but this was the first one operating a revenue flight.

I ended up having to rush to the airport, since the flight was actually an hour early. Yuji Hirako, the Senior Vice President at ANA for the Americas, joked that even though the aircraft may have been delivered late, it’s always good to see an aircraft show up early (he would probably later regret that statement). 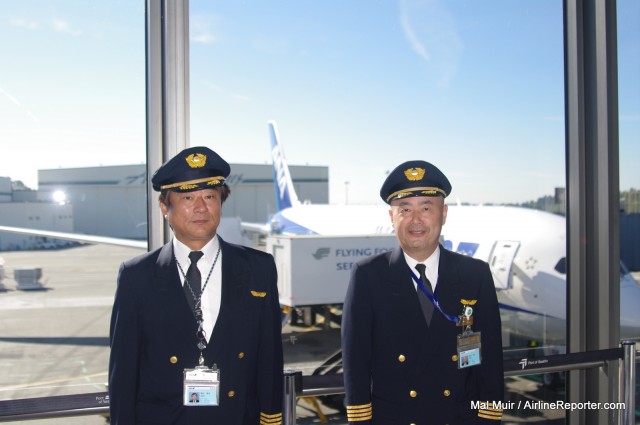 ANA pilots stand in front of the 787 at Sea-Tac.

As the Dreamliner made its approach into Seattle, the crowds at the terminal gathered to watch as the 787 returned to its birth-city.  The aircraft operating the flight (JA814A) was only delivered barely a week prior, on the 23rd of September, making this was its first revenue flight. The aircraft made a stellar touch down on Runway 34L before taxiing to the South Satellite at SeaTac.  Before arriving at the gate, it had a traditional water cannon salute that produced a spectacular rainbow.

The 787 was greeted by plenty of media, guests and invited dignitaries as the Dreamliner Day festivities came into full swing. Speeches were given by Boeing, the Port of Seattle and ANA as they talked about bringing the 787 home, and the friendship that this aircraft can create.  Tom Albro, the Port of Seattle Commissioner, explained how the flight will help to strengthen the relationship between Japan and the Pacific Northwest, . 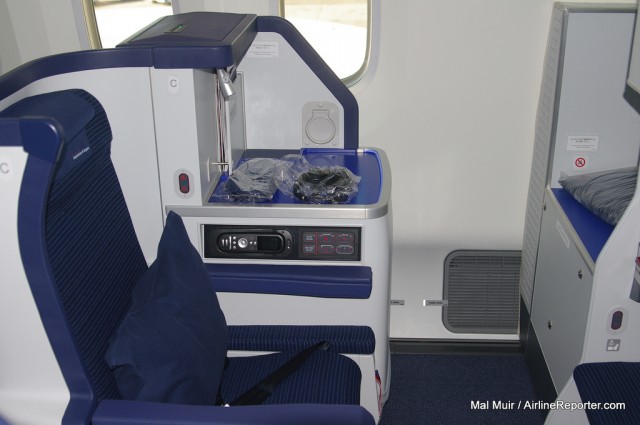 This 787 (JA814A) is configured with ANA’s international business product.

Soon, we were given the opportunity to tour the interior of the aircraft. Part of the “Inspiration of Japan” initiative by ANA is the Business Staggered seat which gives everyone aisle access and a fully lay-flat seat.  With only 112 seats in Economy and 46 seats in the Business Cabin it certainly feels different since almost 2/3 of the aircraft (space wise) isdedicated to the premium product.

Sadly Dreamliner Day didn’t finish off as promising as it had started.  The airline first announced the flight would be delayed 90 minutes, but  things became worse due to a faulty liquid pump. The first 787 revenue flight out of Seattle was delayed a full 24 hours and at the time of publishing is still set to depart Seattle 1:15pm local time today. Let’s hope that it departs on-time today.

This story will be updated on the 787’s flight departure.