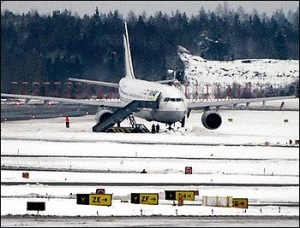 Air Iran flight IR762 was trying to leave from Stockholm on its way to Tehran, but it didn’t make it off the runway. As the Airbus A300-600, with 172 aboard, started its take off roll, it went off the runway about 130yards.’œSome 100, 150 meters out on the runway (the plane) made a very slow turn and got stuck in the snow on the side of the runway,’ airport spokesman Jan Lindqvist said.