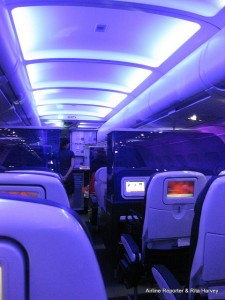 One of the problems of flying Virgin America for the first time is having to compare all other domestic in-flight entertainment systems to Virgin’s RED. Last week Virgin showed off a few nifty upgrades to their already powerful system. Unfortunately I was not able to attend, but I was able to send a correspondent, Rita Harvey, to cover the event in San Fransisco. Here are her thoughts in her own words:

David asked me to fly to San Francisco (SFO) to represent him and Airline Reporter as Virgin America (VA) unveiled their new in-flight features. Having never flown VA before, I jumped at the chance.  It was definitely a unique flying experience; the cool lighting as you walk on board, entertaining safety video and having more in-flight distractions than I knew what to do with at my fingertips.

After arriving at the gate in San Fransisco where their plane and employees were waiting to show off the new features, I got to board and was greeted with a glass of champagne. At this point, I knew I was in for a treat. I was escorted into the first class area and was given a one on one demo of what they’re adding [argh I haven’t even been able to sit in VA first class yet -David].

One huge thing that will be new is having Sky Mall built into their entertainment system.  The Red Store, as they are calling it, has over 200 products to choose from. As it states on the main screen, “ranging from little necessities to the coolest must haves”. I was pretty shocked to see a diamond encrusted iPhone for sale, only $38,000.

The next new feature that they have involves their food and beverage selection. There are going to be cocktails available that have been created specifically for their airline. I got to have one of their creations which was called a “Cocktail With Altitude” (ok, it might just be a normal drink with a fancy name, but that’s alright).  Something else that they’re doing is offering food pairings. When the food ordering screen comes up, you’ll have the option to check out a whole slew of food, side, and drink combinations that complement each other. An example of this is their tapas platter, chocolate bar and either a non-alcoholic drink or an alcoholic one.  Along with all of this, there will now be the option to open a tab. You can either choose to just buy that one thing or swipe your card once and leave the option to keep your tab open. Both of these will most likely entice passengers to part with their money more quickly.

The final upgrade is with their Google Maps. They’re now more accurate and now you can view the terrain. Having a map to see where your plane is  and what landscape you are approaching is pretty cool.

Not only was it fun to get to experience this little jaunt down to SFO to check out Virgin’s entertainment upgrades but it was a pleasant first flight on Virgin for me, to and from the airport. I’m definitely looking forward to flying them again since they are probably one of the most enjoyable airlines to fly with. 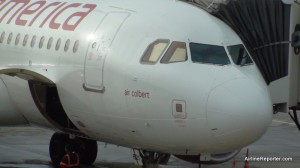 Virgin America Airbus A320 "Air Colbert," the aircraft I flew from SEA to SFO and back, sitting at SEA.

Spending most of a Saturday just flying to one airport then flying right back is not most people’s definition of “fun.” But for airline nerds like myself, it can be!

I fly a lot for personal and business reasons; however I have never been able to fly on Virgin America. Others in the aviation world, my friends, and my family have all given this airline and their in-flight entertainment system (called RED) positive reviews.

I decided I needed to experience RED first-hand. I talked with the fine folks at Virgin America and I was invited to take a flight from Seattle (SEA) to San Francisco (SFO) and back! Game on! 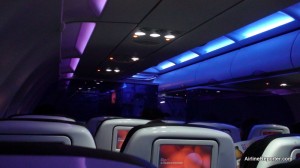 The lights really create a unique and pleasing atmosphere in the main cabin.

I would be flying on an Airbus A320 named “Air Colbert,” after the comedian “Stephen Colbert.” I was hoping this was a sign that it would be a fun ride.

The first thing you notice when getting onto a Virgin America plane is the awesome pink and purple lighting. My flight left around 1:45pm, when it was still light out, and the cabin lights were streaming pink and purple. On my flight back in the evening, the cabin was lit a lighter purple. I learned that they change the lighting as the day goes on to have less pink. I overheard the people in front of me say, “feels like we just got onto the party bus,” and I think that sums it up nicely. Virgin America doesn’t seem to install any special new lighting, they just replace the normal white bulbs with purple and pink. Why don’t more airlines do this? 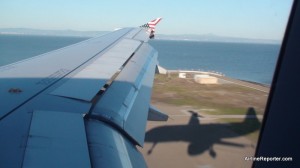 Taken when landing at SFO. I love landing at this airport, it is nothing but water until the last second before landing.

You are also welcomed by black leather seats, all with headrests and of course RED. On my flight to SFO, I purposely decided to sit in Row 13 (since I just wrote a blog on it the day before). Row 13 was lucky for me, since no one sat in the middle seat, even though the flight was quite full.

During the whole flight down to SFO, I played with RED. I have to say this is the most sophisticated in-flight entertainment system I have tried and should be something other airlines aspire to. There was free satellite TV, games (including Doom), chat, music (with 3000 mp3’s), and some internet movies. These alone would keep someone entertained for hours. However, there was also some premium content, like recently released movies, and recorded TV shows that one can purchase.

Virgin America has a standard drink cart service, however there are no free snacks. They make it easy to buy a snack, meal, or premium drink (a.k.a. one with alcohol) right on your RED screen. You can go through the menus, adding food and drinks to your cart (even free drinks), and then check-out. You can pay with your credit card via seat-back credit card swipe or the swipe in the RED remote. Then your order is sent back to a screen for the flight attendants to view, so they can fill and deliver your order. Ah yes, of course I had to test it out, and it worked wonderfully! Before I got my iPhone I would have considered the touch screen interface very high-tech, but I kept finding myself sliding my finger sideways to go to the next menu (like on an iPhone). 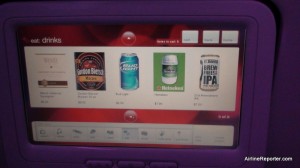 Ordering a drink or food is easy. Just push what you want on your screen, pay via your credit card at your seat, and someone will bring it to you.

Passengers have another option besides touching the screen. Every seat has a mini-remote, where one side lets you change channels, volume, go to the food menu, and on the other side you have a full QWERTY keyboard and video game remote control. You have the ability to chat one-on-one with someone in another seat (which is good if you are traveling with people you are not sitting next to) and you also have an overall chat room for the whole plane. I was very sad that no one came into the main chat room. Jaquelyn, the In-Flight Team Leader (who had an awesome accent) informed me that the chat function is very popular on flights to Vegas and when kids are flying in big groups. Luckily I was able to chat with a passenger one-on-one, who turned out to work for the airlines. I had a hard time working the mini-QWERTY keyboard with it being dark, but I think she got the jist of what I was saying.

If RED doesn’t entertain you enough, all their planes also have Wi-Fi and luckily for me, it was free and will be until January 15th. During the flight to SFO, the middle seat was empty and a laptop was easy to use, but on the flight back to SEA I had someone next to me, and being 6’1″ it isn’t easy to use a full sized laptop in my own little space. Under each seat there are USB and electrical plugs, so no need to worry about your device going dead mid-flight.

I am impressed with Virgin America’s level of service, the seat quality, and of course their in-flight system. Both my flights were about two hours, but they felt more like 30 minutes and I still don’t feel like I was even close to be bored with RED.

SEE MORE PICTURES OF MY ADVENTURE >>>