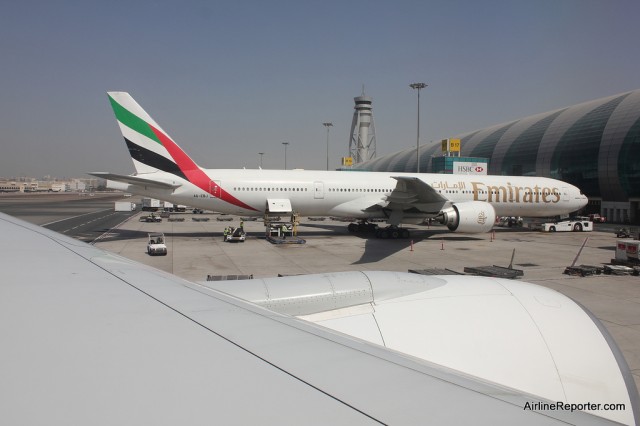 I couldn't get any good shots of my 777-200LR in Seattle or Dubai, so I am using this photo of another Emirates Boeing 777-300ER that I took from my aircraft.

Cheers: Great combination of service and product.
Jeers: If you have wide shoulders, avoid the center seat — even in business class.
Overall: Emirates makes a 14 hour flight easy. 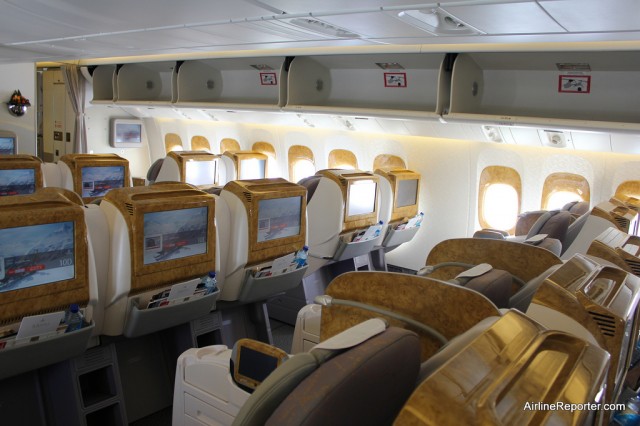 With the wood paneling, the Business Class really has a warm atmosphere. Notice the real flowers on the bulkhead.

On March 1st, Emirates started flying from Seattle to Dubai non-stop. I was invited to try out Emirates Business Class product on one of their recent flights (the airline covered the costs of the flight). This review will be a mixture of both my flight to and from Dubai — although I slept most of the way home.

The benefits of sitting in a premium cabin starts well before you get to the gate, but only once you arrive to the airport. With Emirates, the benefits of flying in Business Class starts at home. If you fly in either Business or First class you have access to a free chauffeured car within 60 miles of your arriving or departing airport.Â  Unfortunately I did not do my homework before leaving and did not find out about that service until I was in Dubai (thanks Ben for the ride to the airport by the way).

However, I was able to make use of the service when coming home and it is always great having someone greeting you with your name on a sign that escorts you right to your front door in a Town Car. Having a Business Class ticket normally gives you access to a lounge at the airport and flying Emirates out of Seattle is no different. Passengers who have either first or business class tickets are able to use the new Club International lounge before their flight. 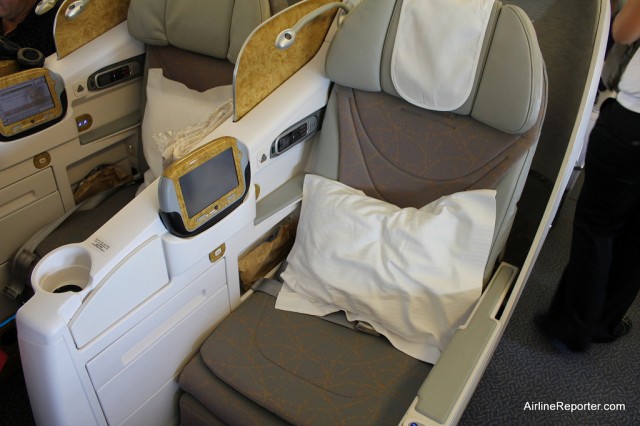 Since I stayed in the lounge for a while, my flight was almost fully loaded by the time I arrived at the gate and I was able to just walk on the plane. I messed up and forgot to check myself in online (I know, what kind of airline reporter am I?), so I ended up in a middle seat: 8E. Emirates has their 777-200LR configured in a 2-3-2 layout in business.

Even though the seats are larger, I was not looking forward to being in the center for 14 hours, but at least I wasn’t in economy. When I found my seat and sat down, I became a little worried — my shoulders touched both sides of the hard plastic walls — not good. Luckily for me the lovely (and smaller) Harriet Baskas, who was in my media travel group, had the aisle seat next to me and offered to swap. I gladly took her up on her offer and never had any problems with the seat width with the open aisle.

I think I would have managed just fine in the center seat, but if you have wider shoulders, I would surely advice checking in earlier to claim a non-center seat. 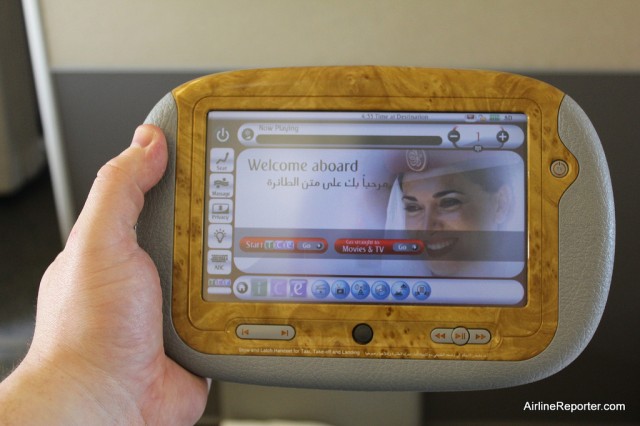 If you like technology and gadgets, you will love Emirates ice entertainment system. Each seat in first and business gets this large, removable remote.

Emirates entertainment system, called ice, was amazing, but a bit overwhelming. First off, you have three options on how to control the system: touching the screen, using the removable touch screen remote or use the smaller wired remote. When sitting in a bulkhead seat, even at 6’1″, I was unable to touch the screen. When I flew back to Seattle I was not at the bulkhead and was able to touch, but it wasn’t easy and I would imagine near impossible if you measuring in at less than 5’10”.

I am normally not very slow when it comes to technology or in-flight entertainment systems, but it seemed like I could only do some things with one remote and I had to do other things with the smaller one. I am sure I just wasn’t able to figure it out, but if I had trouble, I am sure most other people did too. It is worth trying to get past the control issues, because once you do, there are many options — 1200 to be exact.

Emirates, by far, has the largest selection of movies and entertainment I have experienced. After flying a total of 27 hours to Dubai and back, I still had not explored everything it had to offer. For a frequent flier on the airline, this would be a huge perk. No matter what class you are flying in, you get access to the same ice entertainment system (just not the fancy large remote if you are in economy). 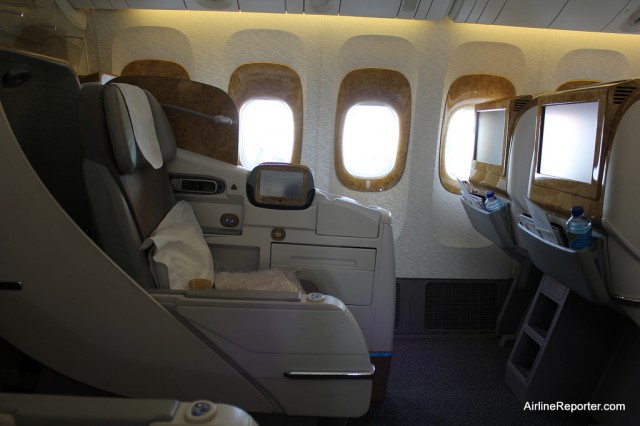 Emirates configures their Boeing 777s with a 2-3-2 layout in Business Class. Notice how the windows have buttons to move the shades.

One on my favorite things, on systems that offer it, are the outside cameras you can access on your screen. The Emirates 777 has one facing forward and once facing straight down. Being in the center section during take off, it was handy watching the aircraft take off via the cameras. We took off to the north and just kept going — almost in a straight line over the north pole and back down to Dubai. Because of this, it never got dark outside.

Passengers also have the option to make a phone call at $5 per minute or send text messages for $1 per message. Every time I tried to access the service, it said it was unavailable, which was okay by me. I was planning on trying it out for the story, but was not motivated to ask one of the flight attendants, since I did not mind saving my money. Although Emirates does have Wi-Fi up and running on all their Airbus A380s, they do not have it on the rest of their main fleet (777, A330, A340) — yet. 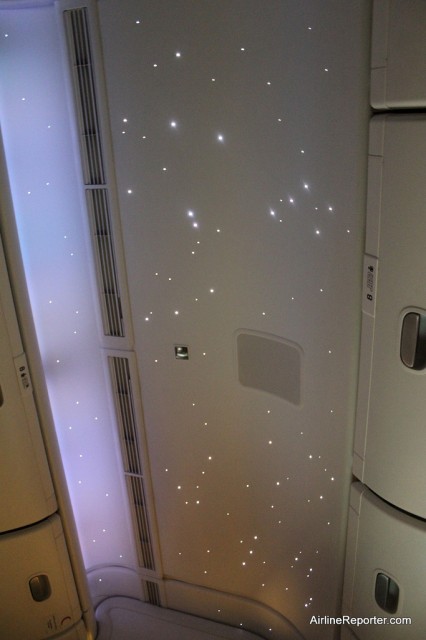 When the lights go down, the stars come up. Emirates offers a special StarLight feature providing a great sleeping atmosphere.

The new Boeing 787 Dreamliner is touted as being unique for its ambient lighting and electronic sunshades. The Emirates product in business and in first is almost as close as you can get to the 787 interior.

First, they have the ambient lighting; going from a soft white/yellow to pinks to purple for the different light cycles. Then you have the windows up front that do not have manual shades, but two buttons that make the shades go up and down. The flight attendants have the ability to to put up or down all the shades, similar to the 787.

What Emirate’s 777 has that no 787 has (yet) are the stars that come out on the ceiling. CalledÂ StarLight, this amazing feature is unique to Emirates and really sets the mood. It is hard to describe, laying flat on a bed at 35,000 feet, opening your eyes and seeing stars.

It is too bad that Emirates doesn’t have any 787’s on order; it would be amazing what they could (and probably would) do with that cabin. 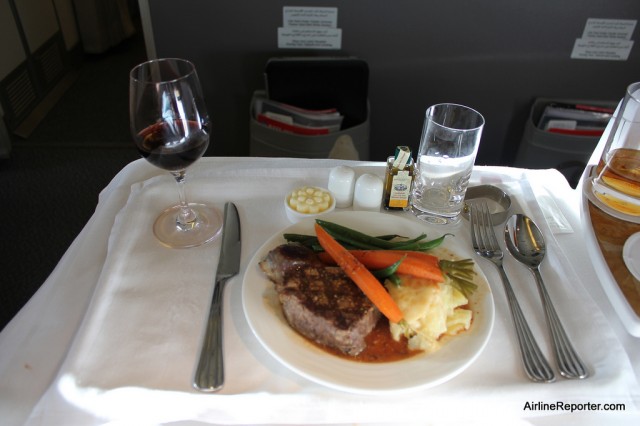 Steak, potatoes I cannot pronounce and red wine at 30,000 feet? Yea, I can handle that.

After settling in, it was time for meal service. My dinner started with a traditional mezze platter with hummus, smoky moutabal, muhammara, vine leaves and a spinach fatayer. Yea, I don’t know what half of that means either, but I can tell you that it was great. Then I was served roasted tomato and thyme soup and salad, followed by the main course of beef fillet with shallots and dauphionouse style potatoes. I decided to skip the dessert option and have a bit more red wine — nice call. 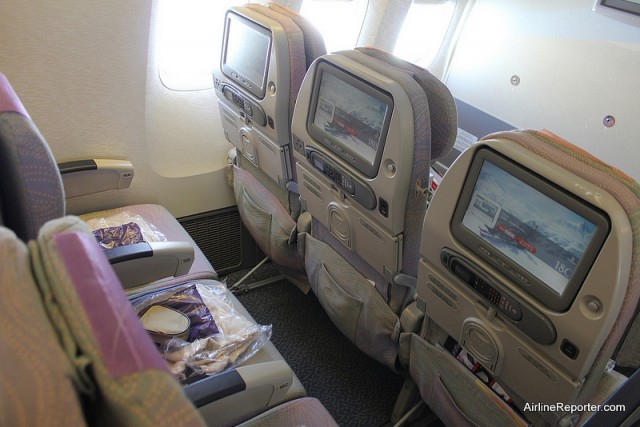 I feel very lucky that I get these opportunities to fly in the front of the plane on long flights, but there is no doubt that I have put my time in economy. During the ride over to Dubai, I made an effort to make a lap around the plane and check out economy. During my tour, most people were sleeping and there were so many feet, arms, shoulders, etc out in the aisle — it was a challenge to get through without bumping into people.

With the 3-4-3 layout in economy, it is a bit tight, but doable with the large screens and same ice entertainment system. That being said, I was happy to return to the business class cabin. 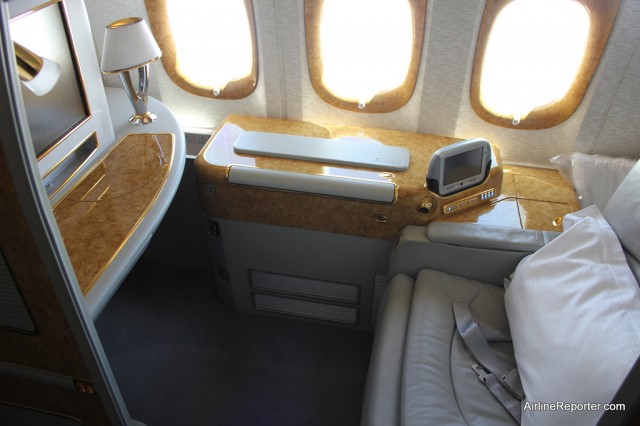 Business Class is nice, but First Class is better. Each seat is like its own cubicle, with closing doors.

When I complete flight reviews, I try to stay anonymous as long as I can. Typically a flight attendant will start asking questions (not suspiciously, but out of curiosity) when I am taking photos of my remote, food, etc. One of the benefits of being known as media is getting access to the aircraft that others might not.

On the flight back to Seattle, I was given the opportunity to spend some time up in First Class. Luckily for me, there were no passengers in the front cabin, which gave me time to check it out and talk to the flight crew. There are four crew members assigned to first class, including the pursuer. They normally work in shifts of two, but when there are no passengers in first, they are able to enjoy a relaxing flight and also will help the rest of the cabin crew, if needed. 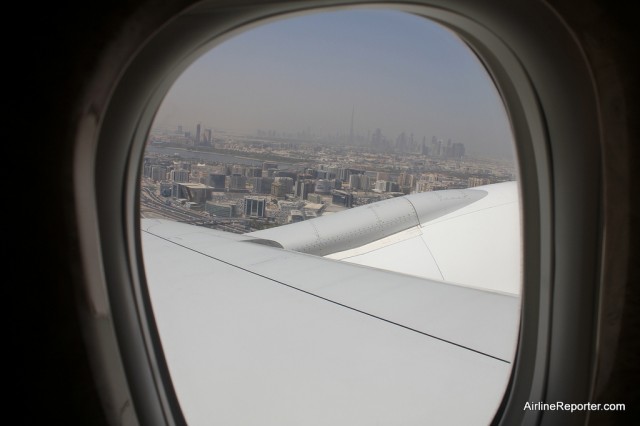 Taking off from Dubai I could see the world's tallest building, the Burj Khalifa in the background.

One indicator on how good a product is on an airline is how well I am able to sleep. The fact that I slept five hours to Dubai and about 10 hours back to Seattle is a positive sign for sure. Another indicator is how happy I am that I was able to sleep so much. In this case, I was upset that I slept so much and wasn’t able to enjoy my experience a bit better. Emirates has lived up to its reputation for providing a fabulous flying experience.

Next is to try and test out their newer business product on the Airbus A380 — stay tuned.

See all 52 photos from my Emirates Airline flight