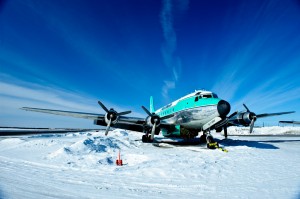 Earlier in the week I shared with you a TV show that I am very excited about (no, I am not getting paid anything to endorse the show).

Sorry for the confusion. If you are able to watch it (or have seen it in Canada) feel free to leave any comments here — I will forward them  to the show’s producers.

The owner, Buffalo Joe, is one cool dude. If you had to create a personality of someone who owns a charter airline using a bunch of old planes, Joe would be that guy. I think Joe’s statement, ’œIf you really want to experience flight in this life, you really have to strap a DC-3 to your ass, let the wings extend out, and that’s the closest thing you’ll come to a human flying,’ really says it all.