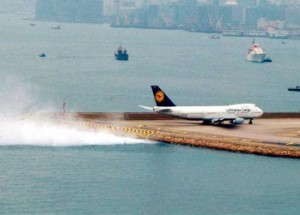 US industrial designer Richard Hales thinks maybe we can. He has worked out some ideas on how to possibly capture this energy, but is the first to admit he is not an engineer. â€œI have received numerous ideas from individuals in the wind energy industry but as I am a general design consultant and not an engineer, with limited experience in wind energy, I have to rely on others to assist me in the final design of the product which would include the amount of electricity that possibly could be created,â€ Hale says.

Hales has talked with representatives from Sky Harbor Airport in Phoenix, where he is based, and they seem interested. â€œThe three persons I met with were impressed with the idea,â€ he recounts. â€œHowever, there was nothing they could do unless I produced a working prototype for evaluation by the City of Phoenix. Since I was not able to afford the construction of a prototype, the idea remained undeveloped for over a year.”

I would like to see this concept explored, but there are some challenges. The winds coming from jet blast can reach up to 300 MPH and it would take a strong unit to handle those winds. However, this concept could provide green energy forÂ  airports and make some use of energy that is mostly wasted.