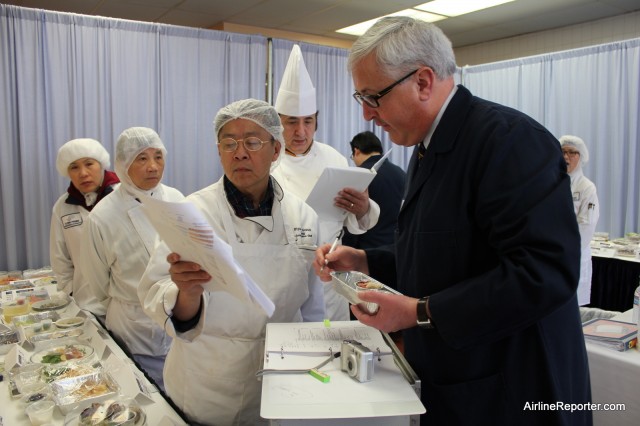 When it comes to airline food, most people have a pretty low expectation of what they will receive. That expectation has lowered even further over the past few years with the almost-complete elimination of free airline food served on domestic flights within the United States. To find a decent airline meal, one needs to take an international flight. Typically, the amount you pay for a ticket will correlate with the level of meal you will receive. How does a world class airline go about providing multiple meals for  up to 477 passengers on just one flight? I wasn’t sure, but when I was recently given the opportunity to check out how Singapore Airlines runs its food operation out of San Francisco (SFO), I could not refuse (note that my trip down and back were taken care of by Singapore Airlines and JetSuite). 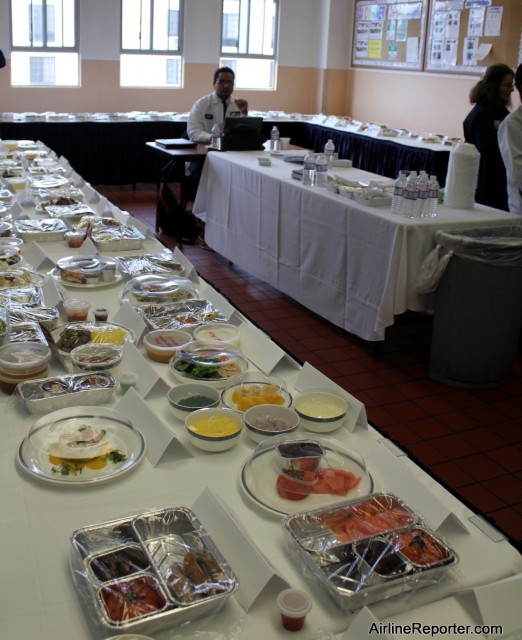 At each main Singapore Airlines hub in the US, it selects a caterer to produce the food. At SFO, it uses Flying Food Group, which also provides airline catering for a number of other airlines, even though all of Singapore’s recipes are unique.

Frequent fliers on Singapore do not want to see the same food week after week, so the airline needs to keep the selection new. Because of this, Singapore Airlines changes most of its entire menu each quarter. Hidden away in Singapore Airlines headquarters is a list of all the food that will be served in the coming quarters. The menu is not just a broad, “we will serve chicken and salad,” but a list that is extremely detailed, down to the exact last gram of everything, how many nuts will be on that salad and how much the entire meal will weigh. 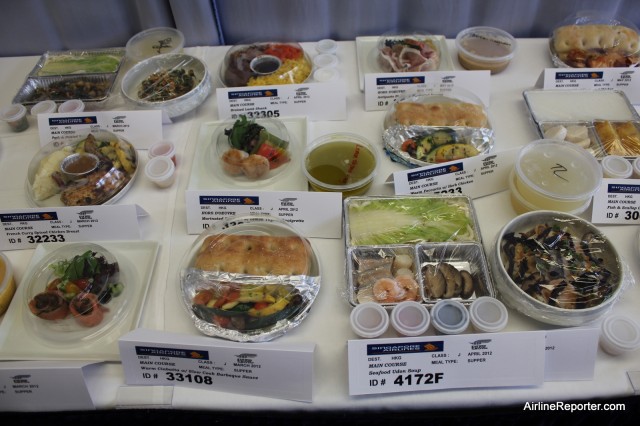 There is no down time when it comes to the food. Just after the previous quarter’s food goes live, Singapore sends the next quarter’s menu to the Flying Food Group, so that they can start preparations for following quarter. Their chefs work on successfully creating the new menu and once they have all the food from each of the three classes completed, they invite Singapore Airlines in for a Menu Presentation to visually inspect each and every item and then taste test the food — this is where my visit comes in.

After landing at SFO, I was driven  to the Flying Food Group building, located just down the street from the airport. The building is not the most beautiful on the outside, but it is more about what is on the inside. After being checked in, I put on an official food tester garb and was taken to a back room, which had hundreds of different food options on display. Representatives from both the Flying Air Group and Singapore Airlines went item by item, going over every aspect of each main dish, side dish, sauces and the plate layout. 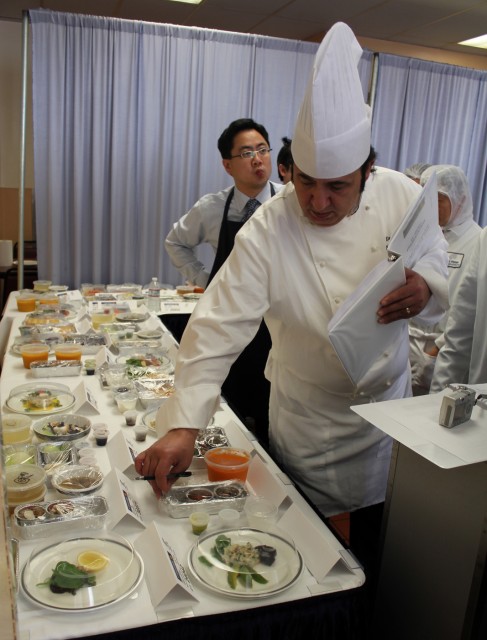 We were escorted to another room, where samples of the food were being served. From the soups to salads, to main entrees, I have to say that they were good — really good. During the sampling it was determined that one of the soups was a bit too spicy and Singapore requested that it be toned down a bit and the caterer agreed.

Making quality food at a restaurant on the ground is difficult enough as it is. Creating a meal, that will not be eaten for another ten hours and it still needs to taste world class is a whole other level. One question is how much should the caterer cook the food vs how much does it get cooked on the plane? For example, chicken will be cooked about 60% on the ground and the rest in the air, where steak will only be cooked 30% before being loaded onto a plane. 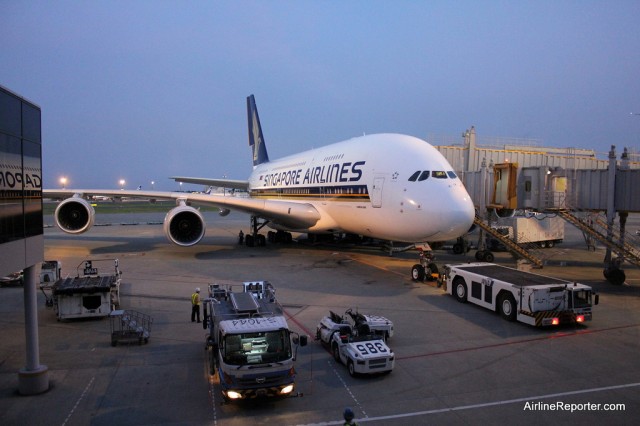 Singapore Airlines Airbus A380 can hold 471 people. Times that by multiple meals and things can get challenging. This A380 is seen waiting at Narita in Tokyo.

Delays in the airline business are inevitable. While passengers begin to stress about arriving late, there are people who are thinking about the food. If a delay pops up early enough, the food’s preparation is held off until later. If the food is already made, it will be stored in a freezer at the caterer. The worse case scenario, if a flight is delayed after the food has already been loaded onto the aircraft, there are times, where the call is made to dump the current food and have the caterer bring over a fresh supply. It is a costly waste, but better than passengers getting sub-par food or worse, sick. 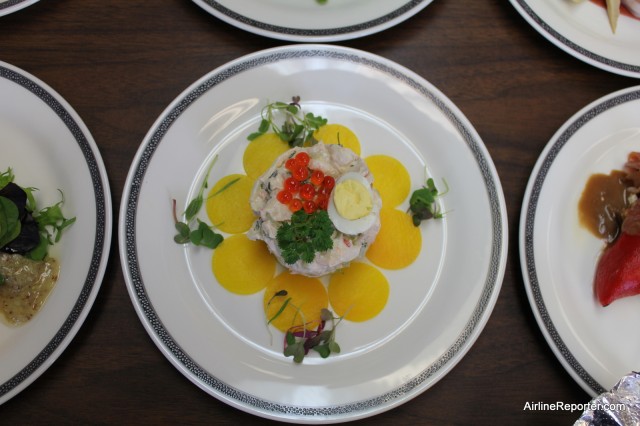 Serving the same quality of food in economy as you do in first class could also cause some sort of incident — folks who pay more, expect a higher level of food. First class meals are prepared using three different types of ovens: steam, convection and microwave. Each item is individually cooked before being served to the customer. Economy food is made to be more efficient and less time consuming. If you order scramble eggs as a First Class passenger, they will break open real eggs while in-flight and prepare them right there on the plane for you. However, if you are seated more towards the back, you are getting pre-prepared eggs from the ground. 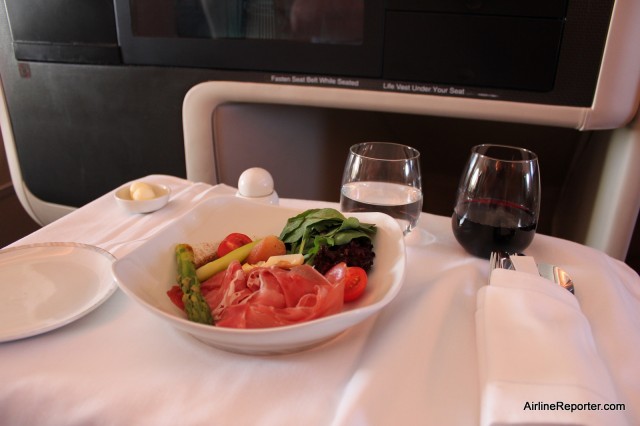 What amazed me the most about this was how much process, time, energy and money is involved to get food to passengers. The crazy thing is this is only for  SFO flights, (there are only three: Seoul, Hong Kong and Singapore) and each of these steps are repeated around the world.

If you get bored of the Singapore menu before the quarter runs out, you also have the options Book the Cook program, which allows you to order a custom meal.

I have had the opportunity to fly on Singapore Airlines A380 previously, and I had no idea the work and preparation that went into my food. Airline food might never be the same for me. I am always going to think about how the meal was planned, cooked and the detailed process it experienced before reaching my palate.