If you have any interest in aircraft and air travel, this web site is for you.  According to FlightAware CEO Daniel Baker, ’œFlightAware was founded with the goal of providing flight tracking to pilots of general aviation aircraft in the United States.  It wasn’t long before that goal grew to include flight departments, dispatchers, airport operators, and private aircraft passengers.  We’re now involved in worldwide airline operations, consumer flight tracking of airline flights, and more.  FlightAware has over 3,000,000 monthly users of the free web site and over 2,500 commercial customers that use FlightAware in an operational or research capacity.’ 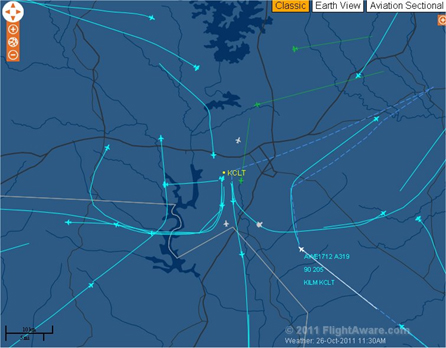 How does a simple web site get all this info?  According to the web site, ’œFlightAware compiles, aggregates, and processes data from a variety of government sources, airlines, commercial data providers, as well as FlightAware’s proprietary flight tracking network.’  In other words, its all public domain and some skilled web programmers have developed a system to let the common person see accurately where domestic (and now international) flights are headed within a 5-minute window.

Flightaware currently has over 1.2 million registered members and that number is growing at a rate of 30,000 to 50,000 new users per month.  CEO Daniel Baker shared with me that, ’œthe rate of airline travelers adopting the site means that it’s our biggest growth area and certainly they’ll eclipse pilots in the long term.  That said, we continue to focus on our roots and will be providing great service to the aircraft operators that use FlightAware operationally.’  With so much already to offer, and a price that’s hard to beat, I’m excited to see what this web site and business will share with us airline nerds in the future.