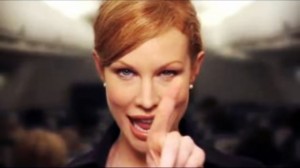 If you were flying Northwest (recently merged with Delta) or Delta airlines at the end of march you might have found some of the flight attendants seemed a bit retro. No, I am not talking about giving you large free meals or free blankets and pillows, I am talking about the way they looked.

To celebrate the new Richard Tyler uniforms, they wore Delta and Northwest uniforms of previous years.

I have to say, I kind of like the new uniforms!

Commercial is not about an airline, but sometimes I wish flight attendants would act more like this to passengers who abuse the system!