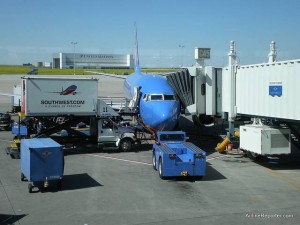 Don't blame the airline for when things happen out of their control!

Consumer advocate Chris Elliott recently wrote a blog stating, “Airlines should refund tickets for cancellation, death, disease and other unfortunate circumstances.” I very much respect Elliott’s work, but him being a consumer advocate and me being an airline advocate, we are going to disagree.

Now, don’t get me wrong, having any of these things happen to you bites (probably the death and disease thing bites more than being late). But how are any of these the fault of the airline? They aren’t.

Airlines give you a choice. Would you like to buy a refundable ticket for a higher price or a non-refundable for cheaper? It is a gamble. What are the chances someone close to you will pass away? That you will get really sick? Or a jack-knifed truck will make you miss your plane? If you think these and other reasons could make you miss your flight, then get the refundable ticket. If you like to take risk and want to save a few bucks, then get the refundable…easy enough. If you lose your gamble, so be it.

I have lost quite a bit of money to the airlines for deaths, illness, a hurricane and just changes of plans. Each one of those where bad situations, but I didn’t expect the airline to refund my money for issues out of their control. I was able to redeem at least some of my money on each ticket. Most airlines will give you credit for future travel with-in a year, for a fee ($25-$100 or so). I know I made the decision to get a non-refundable ticket, took the risk, and I win most times. Over all, it has been very beneficial getting non-refundable tickets over refundable.

There is also a bigger picture here. Airlines are not charities. They need to make a profit to exist and fly us all over the world. If they start offering refunds for incidents that are not their fault, that means all fares go up. Do you want to pay more for your ticket because someone can’t make it to the airport on time? No thanks!

In 2009 there were 711,000,000 passengers that flew in the US. How many of those do you think had a death in the family, got sick or missed their airplane? Even a very small percentage still means big money for airlines.

Now, this is not to say that if airlines mess up and it is their fault you don’t make your flight, you should get taken care of. However, there are already rules in place to protect you when it is the airline’s fault.

What do you think? Should airlines refund more tickets? Should there be a third option for life changing events?