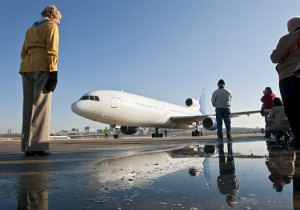 Most airline enthusiasts have a special place in their hearts for the Lockheed L1011 Tristar. There aren’t too many airborne around the world today. You might be able to catch the Sand’s L1011 that they flight high rollers to and from Las Vegas or you could have been in Kansas City, Missouri on Saturday. That is where one L1011, that started life at TWA, made its last flight to the Airline History Museum.

Originally the flight was supposed to occur back in April, but the FAA put a stop to the flight due to serious safety concerns. To get approval from the FAA, Elle had to satisfy 28 airworthiness directives. The L1011 had a complex history, starting life in the US, but also flew in Africa and South America, where maintenance rules are more lax. There was also concern about the rear wing spar having cracks, which is a common issue for these large planes. Planes that were flying in the US had modifications done, but since Elle was out of country she did not. Luckily there were no signs of cracking and after $60,000 of mechanical upgrades, she was ready to make the journey.