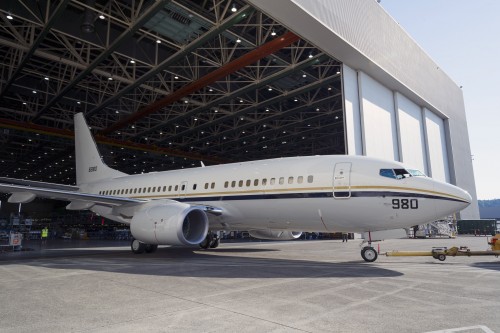 Photo and press release from Boeing:

RENTON, Wash., July 16, 2014 /PRNewswire/ — Boeing (NYSE: BA) rolled out the 5000th Next-Generation 737 this week. The airplane is a Boeing C-40A Clipper, a modified 737-700C, that will serve as a transport aircraft for the U.S. Navy.
“This milestone is another testament to the popularity of our Next-Generation 737 and represents the confidence our customers have in the work of our team,” said Beverly Wyse, vice president and general manager, 737 program, Boeing Commercial Airplanes. “The 737 is hugely popular with both our commercial and military customers because of its efficiency and proven reliability.”
Utilizing the 737 commercial platform takes advantage of the proven efficiencies, manufacturing processes and performance of the existing Next-Generation 737 production system. Boeing’s P-8 maritime patrol aircraft, Airborne Early Warning and Control (AEW&C) and the C-40 are among the 737 military derivatives.

“The quality and dependability of these aircraft are directly linked not simply to their design, but to the hardworking men and women who build them,” said Vice Admiral Robin Braun, chief of Navy Reserve and commander, U.S. Navy Reserve Force.
To date, orders stand at 6,804 for Next-Generation 737s and 2,109 for 737 MAXs. Total 737 orders have surpassed 12,000 including Classics and more than 100 orders for military derivatives.

“With more than 280 different customers, it’s easy to see why the 737 is the best selling airplane in the world,” said Wyse.