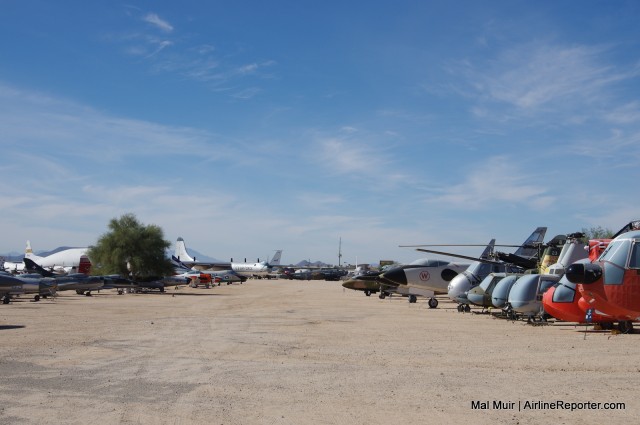 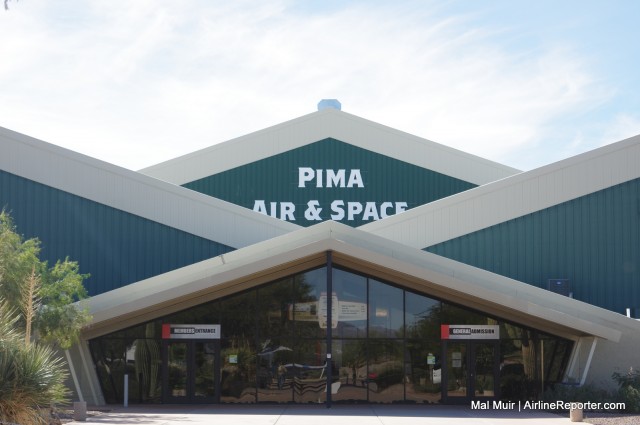 The entrance to the Pima Air & Space Museum

When you enter the Pima grounds you will be greeted by a ’œgate guard’ statue unlike any I have seen before.  The three-aircraft sculpture deemed ’œbeauty of flight’ are replicas of a plane that never was.  The YF-23 lost in the race for the US Air Force’s super fighter to the now F-22 Raptor.  These three fighters greet you to a museum full of some of the most amazing examples of aircraft you will see.

Unlike other aviation museums in the USA, the majority of displays at Pima are outdoors.  So, in the Tucson sunshine, you can wander around outdoors and enjoy some aviation history.  My kind of place! 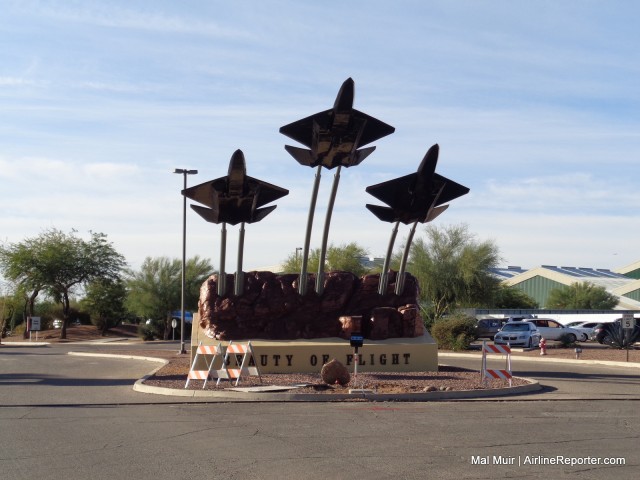 First opened in 1976, the museum had 50 artifacts including aircraft, helicopters, and missiles in its original collection.  That has expanded now to over 125,000 pieces in its collection, with more than 300 different aircraft from small to large.  The collection is diverse, from the world’s smallest bi-plane, to one of the largest bombers in the US inventory, the B-52 (they actually have three of them).  The museum even has its own restoration center, to ensure that every piece of aviation history is in tip-top condition. 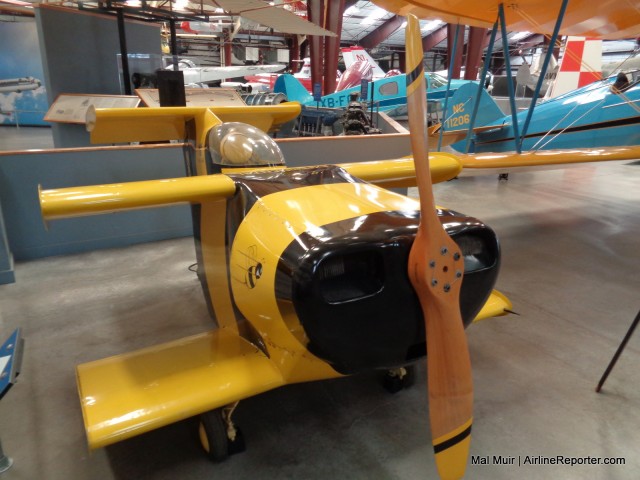 The museum has five hangars dedicated to different indoor exhibits, and a very large outdoor area with some of the larger pieces, the kind that won’t really fit inside a building.  The main hangar hosts a wide selection of aircraft and has a few different themes.  There are pieces dedicated to film history, with a T-33 seen in the movie Jetpilot, or an F-14 Tomcat from Top Gun.

My favorite part of the main hangar had to be the aircraft that I love the most; the SR-71 Blackbird.  Who wouldn’t want to see the world’s fastest jet-powered aircraft, which still holds records to this date and was designed in the 50s using a slide rule?  That is pure AvGeek heaven.

There are two hangars dedicated to World War II aircraft (one for the Pacific theatre, one for the European).  In these hangars you will see aircraft like the B-24 Liberator and B-29 Superfortress, both of which saw heavy duty during the war. 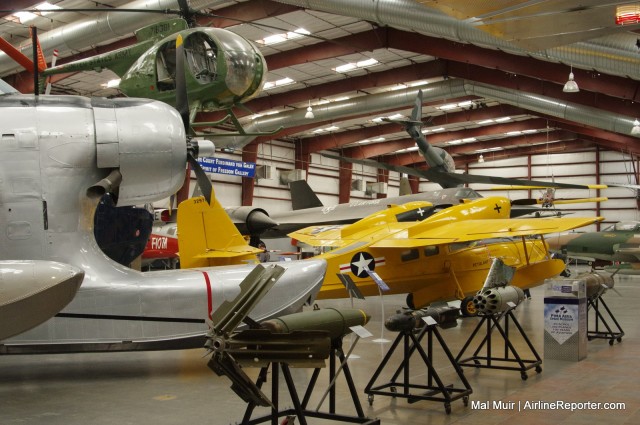 A look at the main hangar of the Pima Air & Space Museum; in the background is an SR-71 Blackbird

The Space hangar is one of the smaller buildings, but has some of the more unique pieces.  A moon rock donated by Tucson resident and Astronaut Frank Borman, along with an X-15 mockup.  The X-15, a rocket-powered high-altitude aircraft, was a bird that on many occasions exceeded 50 miles in altitude, qualifying their pilots instantly for Astronaut status.

The fifth hangar is the restoration center, where large windows let you peek inside and see how some of the aircraft look while undergoing the change back to display condition.  There is a sixth building on site, that is actually a museum within a museum; the 390th Bomb Group Memorial.  Centered around the restored B-17G Flying Fortress ’œI’ll Be Around’ it pays tribute to the men who fought for the 8th Air Force based out of England between 1943 and 1945. 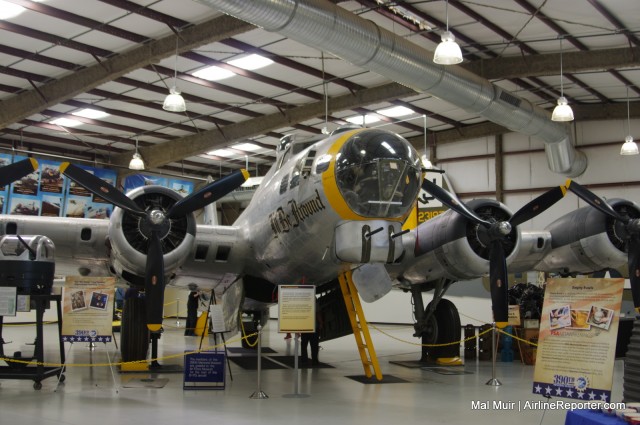 The centerpiece of the 390th Memorial Museum, Boeing B-17G “I’ll Be Around”

The icing on the cake for Pima, though, is the outdoor exhibits.  The space you saw inside was nothing compared to what is outside.  The outdoor exhibits would take about a mile to walk around them all, however you don’t have to do all the walking.  You can hop onboard a tram tour (minimal extra cost) that will take you around all of the aircraft and give you insight into some unique ones.

I have been to a number of aircraft museums in the US and overseas, and I saw aircraft here that I had never seen before.  From helicopters to fighters, to bombers and the true heavy aircraft, they have it all.  Don’t worry if you didn’t take a tram tour – you can still get a good history on the aircraft outside.  Each plane has a small QR code, which when scanned with a smartphone will take you to the history and description of the aircraft. 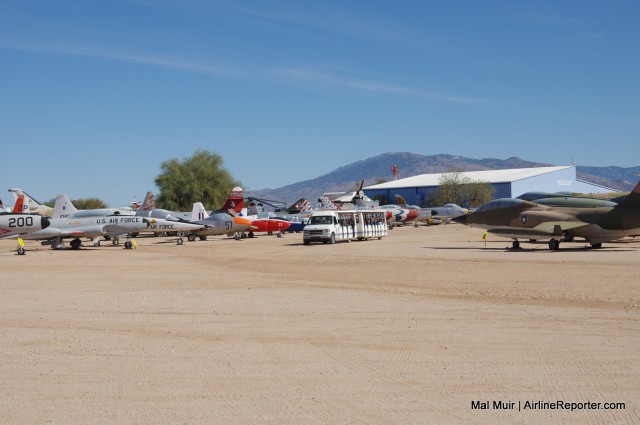 The tram tour means you can get a running commentary of all the different aircraft outside, without the need for taking one step

Although there are so many good pieces out here, the best part is that there is something for everyone.  Not into the military pieces?  There are numerous planes that would make an airliner fan happy, like a 737 that was delivered directly to Tucson from China Southern (and still wearing their livery), or how about a VC-137 that flew as Air Force Two and was the same aircraft to actually return 54 Americans held in Iran for 444 days during the Iranian Hostage Crisis?

Into military aircraft?  My favorites would have to be the Avro Shackleton (what looks like a weird Lancaster bomber, but is actually an early AEW&C aircraft) or the B-36J Peacemaker, an aircraft that not only had six rear-facing piston engines, it has four jet engines as well —  that is one large bird! 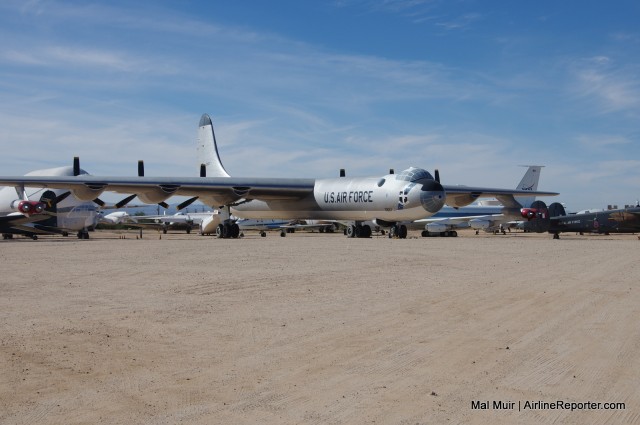 You can easily spend all day at the museum, but you need to allow yourself plenty of time to wander around and just soak in the history.  One thing that is essential when you visit Pima though is to do the famous ’œBoneyard Tour’ where you get the opportunity to board a bus for a tour of the Davis Montham Air Force Base and the Aerospace Maintenance and Regeneration Group (AMARG).  But you can find out more about AMARG in the next installment of our two-piece series.

It is a pretty awesome museum. Always something new every time I visit. Mal, I hope you also made time for the Titan Missile Museum. That’s one of my Top 5 favorite museums worldwide.

One of the best things about the museum is how close you can get to the planes. Take a good look at the B-17 photo. Look how close the chains are to the plane. Then notice that there is a “gap” in the chains under the nose. Yes. You can walk under the fuselage and stick your head up into the plane through the open bomb bay doors. Just great.

I go there every time I’m in Tucson. I never tire of looking at the aircraft and see something new each time.

Wow, great. Thanks for making me aware of the Boneyard Project.

The only problem when I visited was that the sun was so hot I couldn’t linger around the outdoor exhibits!

Enjoyed this! Please post some photos of that awesome Blackbird!

A great museum. and I had the pleasure of going there this past July on a day trip and it was well worth the visit. Highly recommend it