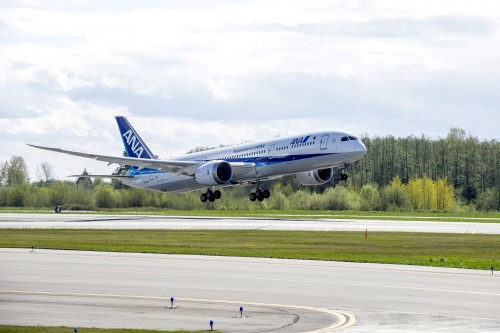 Photo and press release from Boeing:

EVERETT, Wash., July 29, 2014 /PRNewswire/ — Boeing (NYSE:BA) and All Nippon Airways (ANA) today celebrated the delivery of the airline’s first 787-9 Dreamliner.
ANA will become the world’s first airline to operate both the 787-8 and 787-9 variants of the Dreamliner family when the airline launches 787-9 services on domestic Japanese routes in August.
“The 787 Dreamliner is a key element in our growth strategy and we are proud to be the first airline to fly both models of the 787 family,” said Osamu Shinobe, ANA president and CEO. “The new 787-9 will build on the exceptional efficiency of the 787-8 and will allow us to meet growing demand that is anticipated ahead of the 2020 Tokyo Summer Olympics. Our customers have expressed their pleasure with the comfort of the 787’s innovative cabin features and we are excited to introduce the new 787 variant into our fleet.”
With this delivery, ANA will have 29 787s in its fleet, more than any other operator in the world.
“This milestone delivery adds yet another chapter in our long and successful relationship with ANA,” said John Wojick, senior vice president of Global Sales and Marketing, Boeing Commercial Airplanes. “ANA continues to demonstrate the market-leading efficiency and comfort of the 787 family.”
The 787-9 complements and extends the 787 family. With the fuselage stretched by 20 feet (6 meters) over the 787-8, the 787-9 will fly up to 40 more passengers an additional 450 nautical miles (830 kilometers) with the same exceptional environmental performance ’“ 20 percent less fuel use and 20 percent fewer emissions than similarly sized airplanes.
The 787-9 leverages the visionary design of the 787-8, offering passenger-pleasing features such as large windows, large stow bins, modern LED lighting, higher humidity, a lower cabin altitude, cleaner air and a smoother ride.
ANA has 29 more 787-9s on order with commitments for 14 more. Sixty customers from around the world have ordered more than 1,000 787s, with more than 160 currently in operation.