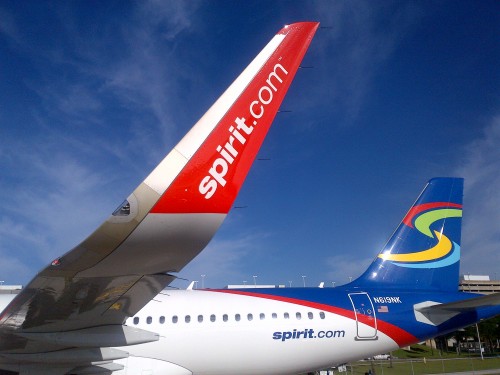 Photo and Press Release from Spirit:

Sharklets are Airbus’ new wingtip device that improves the aircraft’s
aerodynamics which significantly reduces fuel burn by up to four
percent and lowers emissions. The technology reduces annual greenhouse
gas emissions by approximately 1,000 tons of CO2 per aircraft — that’s
equivalent to taking 200 cars off the road! Made from light-weight
composites and measuring eight feet in height, Sharklets also offer the
flexibility of adding an additional 100 nautical miles range or
increased payload capability of up to 450 kilograms. In addition, they
reduce engine maintenance costs and increase operational efficiencies,
including improved take-off performance, better rate of climb and
optimum altitude.

“We are thrilled to be celebrating Earth Day by operating our new
Airbus A320 with new Sharklet technology,” said Spirit’s President and
CEO Ben Baldanza. “Spirit is proud to be doing our part to make travel
not only more affordable for our customers, but at the same time green.
From our modern all-Airbus fleet and eco-friendly seating configuration
among other innovations, and now Sharklets, Spirit has taken serious
measures to reduce our fuel consumption and be more eco-conscious,
while at the same time continuing to offer our customers the lowest
fares in the industry.”

“With the debut of their new Sharklets, Spirit is showing it cares for
the planet and the pocketbook,” said John Leahy, Chief Operating
Officer — Customers, Airbus. “By reducing fuel consumption, Sharklets
help the environment and the airline’s bottom line — it’s great Spirit
is taking advantage of the win-win benefits of Sharklets on the A320
Family.”

As part of its green efforts, several years ago Spirit made the
conscious decision to transition to a fleet of new, fuel-efficient
Airbus aircraft and enhanced them with an eco-friendly seating
configuration. In fact, Spirit burns far less fuel per passenger than
its competitors. Its A320 aircraft provide an incredible 89.4 passenger
miles per gallon.* Spirit has also signed an agreement with Airbus for
an order which includes their latest A320neo (new engine option)
aircraft, which will be even more fuel efficient than Spirit’s current
A320s. In addition, Spirit’s “Bring Less, Pay Less” baggage program has
led to a reduction in bags carried per passenger and resulted in Spirit
using the equivalent of nearly six million gallons less fuel in the
past year.