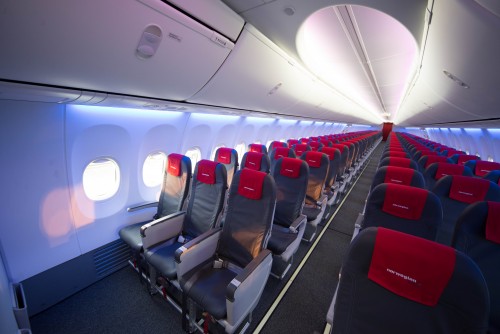 Photo and Press Release from Boeing…

“Our goal is to provide passengers with the ultimate experience in comfort and convenience when they fly with Norwegian,” said Bjorn Kjos, chief executive officer of Norwegian Air Shuttle. “The Boeing Sky Interior on the Next-Generation 737 helps us to deliver just that.”
A passenger survey conducted by Norwegian Air Shuttle soon after the airline began service with the new look found that more than half of respondents rate the 737 Boeing Sky Interior more comfortable than the standard interior. And passengers reported they feel “happier” in the new interior.
Since the first 737 Boeing Sky Interior was delivered in October 2010, more than 60 customers have ordered the new interior.

Approximately 85 percent of Boeing’s backlog of more than 1,900 Next-Generation 737s will be delivered with the 737 Boeing Sky Interior. The passenger-preferred interior will be standard on Boeing’s newest family of single-aisle airplanes, the 737 MAX.