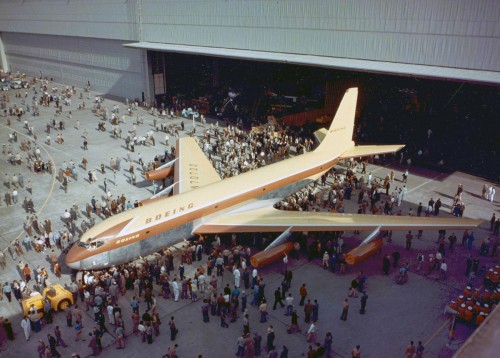 The predecessor to the Boeing 707, the famous 367-80, rolled out at Renton on May 15, 1954. It was the only one built; and is narrower then a 707. This is the very aircraft that famed Boeing test pilot Alvin ’œTex’ Johnston barrel rolled in front of a demo to Boeing customers over Lake Washington in 1955. On May 26, 1972 Boeing donated the Dash 80 to the Smithsonian Air and Space Museum, which had designated it one of the 12 most significant aircraft of all time. For the next 18 years the aircraft was stored at a ’œdesert boneyard’ in Arizona before being retrieved by Boeing in 1990 for restoration, though it was used for some flight testing sporadically during that time. The Dash 80’²s final flight was to Dulles International Airport near Washington, D.C. on August 27, 2003. it is now on display in the Steven F. Udvar-Hazy Center at Washington Dulles International Airport in Virginia.
Image courtesy: Boeing