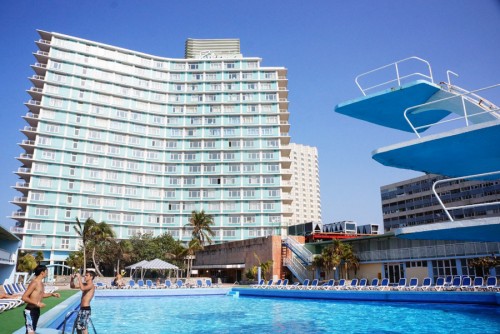 The Hotel Habana Riviera, or Havana Rivera as it is otherwise known, is located on the MalecÃ³n, looks virtually just as it did at the time of its 1957 opening. Overlooking the Gulf of Mexico, the Rivera was the first hotel in Cuba with air-conditioned rooms. This historic hotel was not only controlled by mobster Meyer Lansky but was anuary 22, 1959, a press conference was held at the Copa Cabaret, which was attended by national journalists and some guests, and there Fidel Castro gave his response to the world in regards to the Cuban Revolution. It was taken over by the Cuban government and its casino was closed. This 350+ room hotel, remains one of the most perfectly preserved example of its kind in the world. Photo by Chris Sloan.