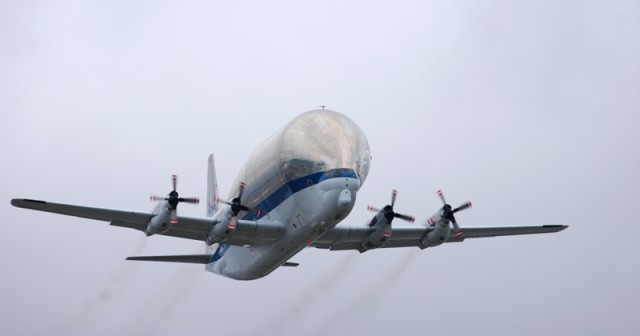 This story was written by Malcolm Muir for AirlineReporter.com:

Saturday June 30th was going to be a truly epic day for Seattle.  Not just for the avgeeks amongst us but also for the spacegeeks, tourists, residents and anyone else you can think of.  With the shut down of the Shuttle Space program all of the original shuttles, training pieces etc were being farmed out to museums across the country.  Smithsonian was doing a swap with the Intrepid for a real shuttle, it made the news with the fly in shown world wide as a 747 piggy backed the shuttle to Dulles.

However, the Museum of Flight here in Seattle had also tried to get a shuttle, but there bids were unsuccessful.  They were not able to get a real shuttle, however they did not come out of it empty handed.  What they ended up managing to acquire was the Shuttle trainer.  This full size mock up of the shuttle was used by the astronauts as their training piece and also used as a test bed for any upgrades that were made to the shuttle fleet.

Even though it was not going to be a real shuttle, this was going to be just as good, you could get into this, touch it, feel it, see how things really worked.  But the main thing is, how do you get a full size shuttle trainer (that can’t sit on top of a 747 like the real thing) from the Johnson Space Centre in Houston, across to the other side of the country to the Museum of Flight in Seattle. 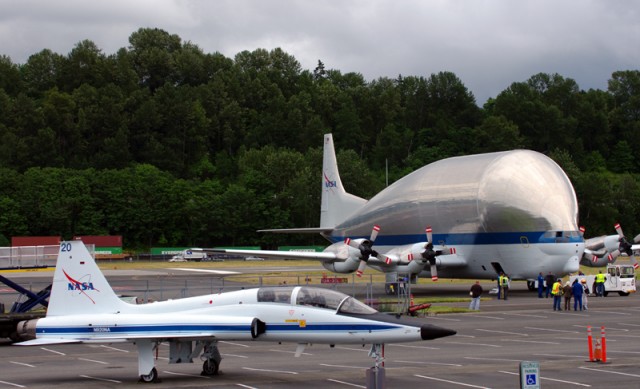 The Super Guppy sits next to NASA’s chase plane outside the Museum of Flight. Photos by Malcolm Muir / AirlineReporter.com

Bring on the NASA Super Guppy.  The last one left in existence that can still fly, is operated by NASA.  So why not bring it on over to Seattle with the first of the pieces of the trainer; the Crew Compartment.  The Super Guppy was originally designed to haul around pieces of oversized cargo and is based on an old Boeing Stratocruiser with Turboprop engines (the same used in the early C130 Hercules models) and having the iconic bulbous nose.  NASA acquired it from the European Space Agency in the 1990s so it still has a fitting role in the Space industry.

The Super Guppy was scheduled to bring in the first piece to Boeing Field, where it could park right next to the Museum of Flight, unload and they could just deliver the first of 3 large sections directly to the new purpose built facility.  However the weather was making things just a little bit difficult.  The clouds threatened all morning and there was a weather delay.

By the time I arrived at the museum the crowds were pumping.  Soundwave, the Seattle Sounders Official Band, were putting on a good performance for the crowd to keep everyone entertained.  There was a good variety of people and the museum Caf and shop were doing a roaring trade.  I, on the other hand, was on the way to hit up the best viewing spot possible (turns out it was directly above some fellow avgeeks).

Soon enough after a dozen false alarms thanks to an oversized Banner/Flag being towed around Seattle, the Super Guppy came around for her low pass. 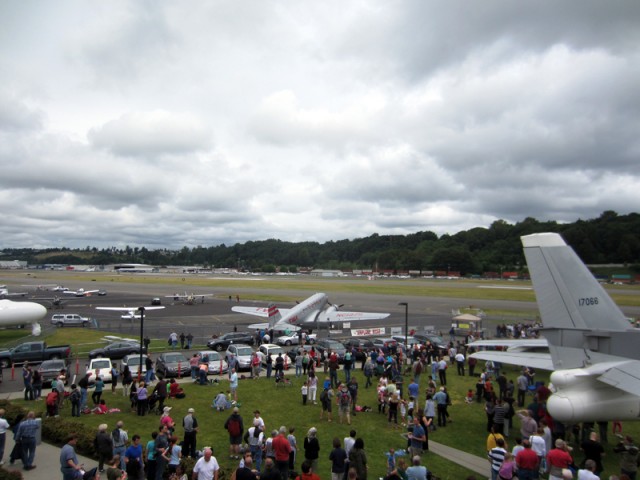 The Museum of Flight’s DC-2 waits to welcome the Guppy. Photo by Malcolm Muir / AirlineReporter.com

She was brilliant and shiny.  You could see her coming from a mile away as the smoke belched out from the turboprops (just like they do on those old engines) and with a chase plane for photos or escort (not sure which).

Eventually she came back in for her landing and it was a graceful touch down, with a bare puff of smoke as the wheels touched the tarmac.  She taxied almost the full length of the runway directly up to the parking lot in front of the museum.  Here is where the fun really started for the ground crews.

The crew that the flew the aircraft were met by someone dressed in an EVA Space Suit and off into the crowd they went.  The crew that flew the Guppy were in a fully fledged astronauts suit as well and many kids wanted their photo with the crew and the ’œSpaceman’.

With the time for me running short I started to head off, but not before watching the ground crew try to squeeze the Guppy into the parking bay.  It was a tight fit with a 48ft undercarriage width and a 50ft Wide Taxiway, things had to be perfect.  It took a good 15 minutes or more just to move it a few feet (probably longer as when I left at the 15 minute mark they were still at it).

A truly epic way to start the summer off here in Seattle, a rare aircraft, a small amount of Avgeek and the beginning of what will I am sure be an amazing exhibit for the Museum of Flight when it opens in late 2012.

A fun post and some very nice pix. The Guppie/Super-Guppie is a unique type as I guess NASA’s edition is the last one flying. I always find it almost funny to see those relatively small props spinning on small but powerful turbo-prop engines – and attached to such a large airplane. When they rev them up to TOGA for take-off, the pitch angle on those tiny blades must be huge. Given the unique value of the now one-of-a-kind airplane, as well as the value of some of their cargo, I bet that don’t often fly in anything other than perfect VFR weather. Where most flight plans include one (perhaps two) alternates, I’d bet that these pilots plot a route that gives them a suitable out at least everey hundred miles. One cannot help but be curious about the backgrounds of the crew(s) that fly this airplane. They are masters of the profession, to be sure.

Wow. I flew through El Paso on Wednesday the 4th and saw this thing parked outside of a hanger off the runway. I wondered aloud to my wife what type of aircraft is was. Now I know! They must have flown to ELP after Seattle! Pretty cool, thanks for the post!

Hello. Is this spacesuit man or woman? Which wear it?