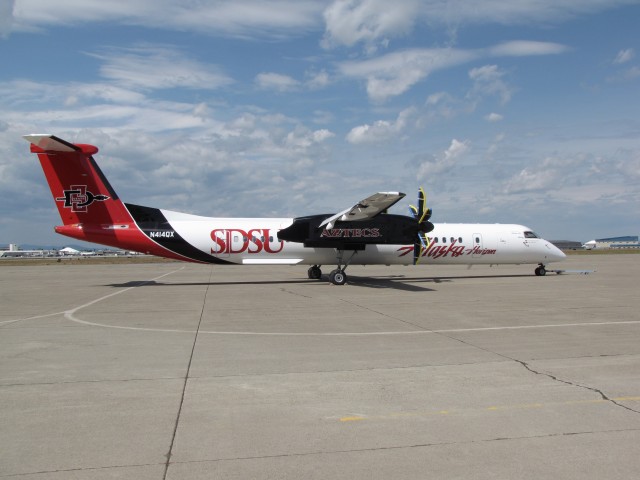 The newest livery on Horizon's Q400 is one for the San Diego State University Aztecs. Image from John David Wicker.

Horizon Air,Â which operates Capacity Purchase Agreement flights for sister carrier Alaska Airlines,Â is the eighth largest regional airline and is based in Seattle, WA. Recently, their own Horizon liveryÂ disappearedÂ and was replaced by Alaska’s Eskimo, but the airline still retained a nice collection of unique liveries.

On May 31st, Alaska showed off their newest livery:Â San Diego State University at San Diego International Airport (SAN).Â The unveiling of the new livery was timed to celebrate the start of Alaska Airlines new San Diego flights to Fresno, Monterey and Santa Rosa, Calif., which began on June 4 and 5.

â€œWeâ€™re proud to add San Diego State Universityâ€™s bold colors to our fleet of university planes and especially pleased that this aircraft represents our first California school,â€ said Joe Sprague, Alaska Airlinesâ€™ vice president of marketing. â€œWe hope the Aztec plane will bring smiles to our passengers and be a source of pride for SDSU students, alumni and faculty for years to come as we fly it throughout our regional route network.â€

It took a crew of eight people working around the clock for seven days at Associated Painters, located in Spokane, WA to paint the SDSU livery. The painting required 32 gallons of white paint, 10 gallons of red paint and four gallons of black paint. In addition, about 2,000 sheets of sandpaper and 10,000 yards of masking tape were also used.

Check out the gallery below for additional special Horizon/Alaska Q400 liveries:

Guessing one of the main reasons is the Mariners are MLB and not a college team!

Funny, I guess. I think it nice of them to inest a little paint on an otherise plain airplane. Forlsk either love – or hate the Q-400 and they are in two classes. The lovers are those who rely on them regularly as the ONLY link between home and a metro airport with real jets to link them them to other services with larger airplanes. She is not a 747-8, yet stable and comfortable when flown by pilots who understand the machine. The haters, sadly, are mostly the annoyed pilots who would have moved up to larger airplanes, years ago, save the mergers and acquisitions. They are stuck for a while, building more hours and resentful. I understand. In th e h ands of a pilot h wo understands the machine, it is a joy to ride and in almost any weather. In the hands of a time-builder who does not give a twit beyond a legal landing, they can be absolute hell. Take your choice.