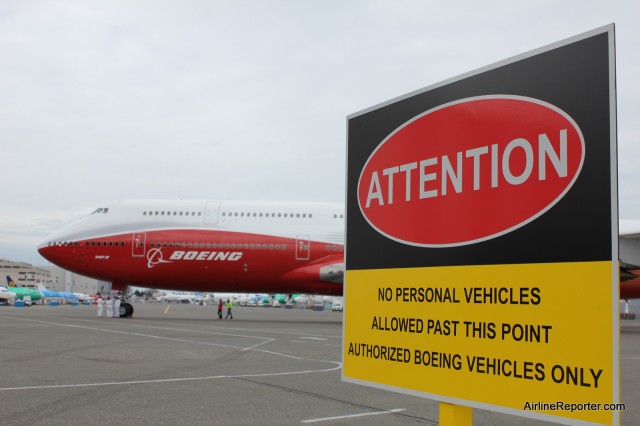 After the Boeing 747-8I landed for the first time.

I have been doing this airline blog thing for about three and half years now. At the beginning I always struggled to answer the question, “so what does your blog do?” As time has gone on, I have gotten a bit better at it (at least I think), on describing what it is I do. Even though I have moved to cover aviation and travel, the main bread and butter is still airlines.

From Jon Ostrower with the Wall Street Journal (formally with Flight Global) and Addison Schoeland with AIG:
My blog recently won second place in FlightGlobal’s blog of the year contest and the Â two judges stated,Â  â€œFrom trip reports to breaking news, Brown captures his enthusiasm and passion for aviation, taking his readers along for the ride. The Airline Reporter brand is synonymous with the communityâ€™s passion for aviation. Every post, every tweet is done with the same infectious energy that permeates the internetâ€™s AvGeekdom.â€

From Johnny who is Johnny Jet:
“I met David Parker Brown (aka theÂ Airline Reporter) onÂ Air New Zealandâ€™s delivery flightÂ from Boeingâ€™s headquarters in Seattle. Davidâ€™s a really cool guy and he is quickly making a name for himself in the aviation world. He seems to get invited on every delivery flight and he just did one a few days ago when he took RwandAirâ€™s brand spanking new Boeing 737-800 all the way from Seattle to Rwanda. Since a 737 doesnâ€™t have that much range, they had to make a few stops and I learned, by following his Twitter feed, that they stopped in Iceland and Istanbul on the way. If you like aviation, be sure to add David to your list.”

From Brett Snyder with CrankyFlier.com:
“David Parker Brown lives in Seattle and so youâ€™ll see some of the local goings-on from his perspective. What I like about this blog is you often feel like David is learning right along with you. Heâ€™s enthusiastic, and itâ€™s a unique perspective, so itâ€™s fun to follow.”

From Scott McMurren with AlaskaDispatch:
“I’ve followed David’s updates atÂ Airline ReporterÂ for years. I finally met him on the tarmac at Sea-Tac last year to watch Alaska Airlines’ offload the first load of Copper River salmon. David’s blog is a great read if you’re an aviation nut (guilty!). He talks about new planes, new airlines, new paint jobs — and the business of flying planes.”

Thanks to everyone for their kind words. So how do I describe what I do myself?

I think the bottom line is I love aviation and airlines and I love to share that passion with others. I am glad that many of you are along for the ride!