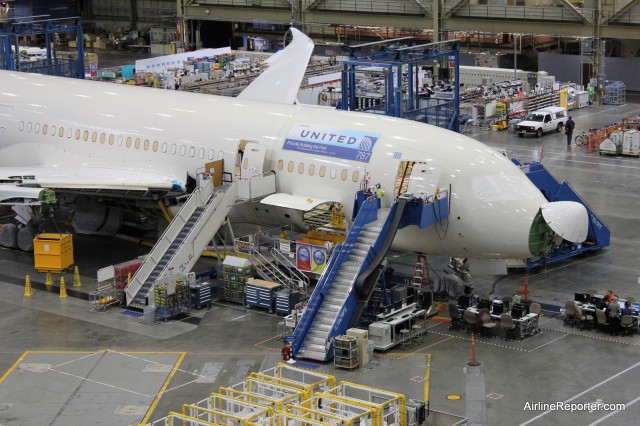 A few weeks ago there were rumors that United’s first 787 Dreamliner might have gone into the paint booth. As an airline geek, this is exciting news. It would mean that we get to see the 787 in a United livery and we get to find out if United is going to dress their first 787 in a special livery.

As time passed and no 787 in United livery came out of the paint booth, I started to wonder… where the heck is United’s first Dreamliner?

I reached out to United and they said that their plane was out of the factory, but has not gone into paint. “We are quite excited for this revolutionary aircraft to join our fleet,” Mary Ryan with United Airlines communications explained to AirlineReporter.com. “As for the status of our first 787, unfortunately the rumor is untrue: the aircraft is out of the assembly process but has not yet gone into paint.”

Bummer, but my guess is that we won’t miss it since I expect United to celebrate their first aircraft.

There were other rumors that aircraft #45 might not be going to United Airlines anymore. No worries Boeing confirmed to me that, “there has been no change to the customer who will take delivery of [L/N45].”

The last rumor is that United is planning to paint their Dreamliner in a special livery. Although it is likely, my bet is do not expect a revolutionary change. My guess is that the globe will still be apart of the 787 and that United is not planning on an entirely new livery for their entire fleet. I know there are some of you hoping that United will unveil an entirely new livery starting with the 787 Dreamliner, but they have spent millions on transitioning to the globe and I highly doubt they will work towards another look.

The livery rumors will have to remain out there for the time being. We might just have to wait until the big unveil, which at this time no one knows when it will be.

As a former Eastern Airlines person who even after sooooooooooo many years still lives and breathes everything airline, its an exciting time to see these new aircraft come online!

All the best to Boeing and to United!!

The current paint scheme is not United.

Yes, C.T., it is United and you’d better get over it already.

No, it’s not. It will never be United. You get over it.

I hope it looks ugly…woo hoo!

I like the Global Look for United and as a World Leading Airline it fits the image the company is trying to achieve. GREAT LOOK

I hope it’s that crazy late 70s-1980s scheme with the orange stripes and giant tulip on the tail.

color it however, the service won’t match that of many, if not most of its competitors.

Slightly off topic, but I love the seating under the nose of the 787, that has to be the coolest office ever!… better than my corner desk with a window!

If it going to come in a reto scheme, then it should have a great big red meatball on the tail not a tulip. after it’s form our aircraft order not theirs.