Yesterday, Southwest Airlines announced some pretty big changes for the inside of some of their Boeing 737 aircraft, which they are calling “Evolve: The New Southwest Interior.”

For the average customer, the differences probably won’t be so obvious — hence why Southwest is calling this an evolution rather than a revolution. The tones of brown and blue will be familiar, but with a closer eye, one can see the changes. From Southwest directly, here they are: 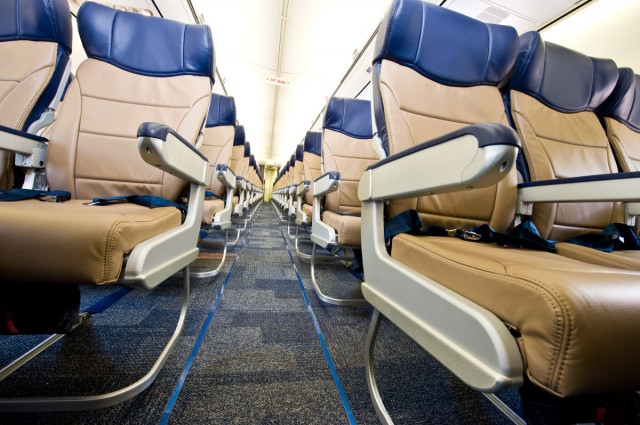 The new Southwest interior with new seats and carpeting. Photo by Southwest Airlines. 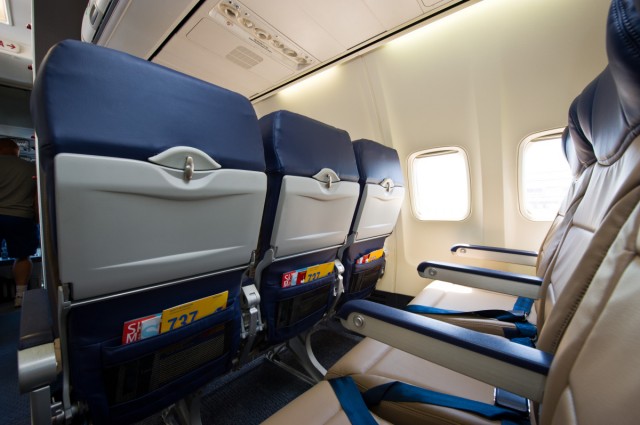 There might be less seat pitch, but there is more space. Photo by Southwest Airlines.

The new interior means that there allows Southwest to put six additional seats on each aircraft. This is due to reducing the seat pitch from 32″ to 31″, using the skinnier seats and reducing the recline from 3″ to 2″. This will allow Southwest to increase their profit, without having to add fees.

The seats are made with eco-friendly materials and are designed to last longer, reducing replacement costs. Each seat weighs six pounds less than theirÂ predecessor, meaning real fuel savings for Southwest Airlines. The new carpet, which is made out of recycled materials, is put in by squares where a section can easily be replaced instead of taking out the whole carpet.

“We are preparing now for our next 40 years with a fleet modernization plan that includes the new interior, the Boeing 737-800 which is scheduled to come online beginning in March this year, and the 737 MAX, which is expected to join the Southwest fleet in 2017,” said Bob Jordan, Executive Vice President and Chief Commercial Officer. “The evolutionary changes weâ€™re making with the new interior uphold our low-cost roots and historic focus on Customer Service. The cabin upgrade also allows us to create significant revenue opportunities without adding unwanted fees.”

Southwest plans to update all their newer Boeing 737-700s and also AirTran’s 737s and 717s. They have not stated if they will update their older classic 737s, but my guess is that they will not. Â It would be unlikely, since they recently announced an order 150 new Boeing 737MAX aircraft.

Learn more about Southwest’s new interior:
* Great 360 view of the interior
* Story from Mary Kirby with APEX, who was there at theÂ reveal
* See more photos and learn more on the Nuts about Southwest Blog
* In October 2009, Southwest shows off their Green PlaneÂ

I’m skeptical that these seats are as comfortable as the older ones…less room, thinner seats, let’s see, who wins on this one? (Answer: SW, cramming 6 more seats into the plane with no more overhead space)

at least SW doesn’t charge to check a bag, so the overhead space won’t be as used as on other airlines. (trying to put a silver lining out there)

Look nice, and I just learn Southwest is the #1 airline in services in the US. Which take me to something unrelated of this news but I need to vent (sorry David), I just also learned American was choosen the most hated airline. People complaining about delays and cancelled flights. This pains me a little since American is my favorite airline (so I might be bias), I flown a lot (and I mean a lot) in American and I have no complaint about it. I just had once a delay bcs of weather and one cancelled flight because the pilot had a warning light on the EICAS (I got a free night at a nice hotel though). If people knew what it takes to run an airline they will look at it in a different way, specially one as big as American. The only complaint I have is the same for most airlines, a freaking bag of peanut is all you get, but in term of service I love American Airlines and the prices are not bad to flight I just flew from Orlando to Puerto Rico and back for just $300.00. I know David this is unrelated to the Southwest story but like I said I needed to vent and since this is one of my favorite airline sites I choosed you (sorry).

Looks nice but when they say “Room was created by switching to lighter, thinner padding” all I can think is how numb everyone is going to be on flights longer than 2 hours. This move doesn’t seem good for anyone but Southwest. It doesn’t make sense that they can say they reduced pitch by 1 inch but you have the same room as before. That inch of space went somewhere, oh yah to that new row you are putting in. This may be fine on the short flights but Southwest is flying longer nonstops more and more and I think this is going to be problematic for us taller customers. Looks like I will be flying United and Delta E+ if possible.

I recently flew on Continental’s newest 737 whose interior is patterned after the newest Boeing Dreamliner. Excellent headroom under the overhead storage bins. Pleanty of leg and hip room. I’ll have to fly SW to compare the two.

Dan,
I’m a Diamond at Delta, and I’m leaving. Instead of looking for ways to increase revenue, they seem to focus on cutting costs…only. In my experience, this has resulted in fewer and poorly trained workers. The customer service lately has been astonishingly bad. So bad, in fact, that I’m giving up nearly guaranteed first class upgrades for skinnier middle seats.

I recently flew from MDW-PVD and then PVD-MDW-OAK in these seats. I definitely noticed the decreased leg room (even though I think they limited the recline on these new seats to make up for the seats being 1″ closer together) and my legs and rear were numb and sore from the thinner padding. Definitely NOT a fan and I am going to be heavily considering alternative flying options after 12 years dedicated to pretty much only flying SWA. Not to mention their prices have gotten INSANE compared to competing discount airlines (Virgin America, for one).

Guess that the more things change the more they remain the same. SWA was the dependable, low-cost domestic airline: DCA to OAK, or BWI to PBI–we flew them all the time. Now they are the same as everyone else. Higher fares, often matched or beaten by United or USAir, and bad service, which now seems to be the industry standard. So how do you convince folks that they have to pay more for less room and that it is in the customer’s best interests? Now I fly schedule and price, not airline or loyalty program.