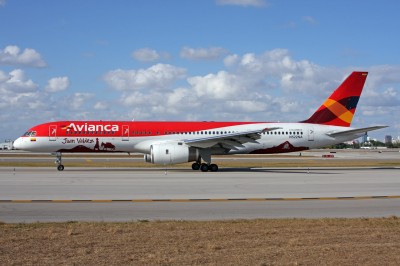 Very odd. I did write after I got your comment, but it didn’t go live. My blog posted this morning also posted pre-spell check, even though I saved it afterwards. Something fishy is going on with Word Press. Thanks for following up — it should be fixed now.

I love the Avianca livery, especially after seeing it in MAD this past month. They have one of the most beautiful airline liveries, IMO.

Will you be making the change anytime soon?

Reuters pulls off my RSS feed and normally it takes a few hours for it to update any changes — so stay tuned.

I am the CEO of Avianca Airlines Virtual on the simfly.eu server. Been enjoying things like this i find around. We used the Juan Valdez 767 theme for our Avianca A380 (fictional repaint) We also love the colors of the suma scheme.[IMG]http://i1233.photobucket.com/albums/ff382/MrPr0pWash/2011-6-30_20-48-20-315.jpg[/IMG] This is a Dash 8-400 we use for shorter hops around Bogota. We use SKBO for our home base but have several hubs.
Thanks for letting me share. IronHand.

Great livery. Enjoyed seeing this (and possibly other) Juan Valdez aircraft in Bogota in 2009.