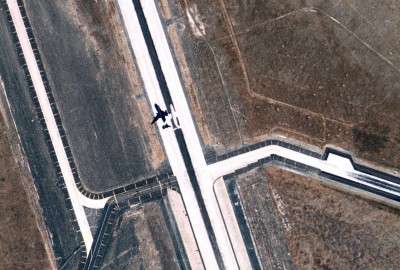 Take a guess. What airport is this Boeing 747 landing at? Click for larger. Photo from Google Maps

You might be an airline nerd if you go searching on Google maps for satellite shots of airlines landing or taking off. I know I have done it more than one time.

This one was emailed to me by reader Ron T and I couldn’t tell which airport this was, even though I should have.

So I pass it on to you — what airport is this? And a little easier, what kind of plane if that. Click the image for a larger version.

Yup! [email protected] is correct…..I wouldn’t have known…not a clue….but alas, Google Maps does not lie.

“What kind of plane is that?” Is that a trick question? You told us 747 earlier in the post. 🙂

Well, I am going to use the excuse I was editing this at 3:45am this morning and posted at 4am 🙂

The airport rather narrows down the possible airplanes, eh? The shadow shows 4 engines, although the hump is a bit harder to make out.

I’m willing to venture that it’s the RC503, which is painted in Cargolux colors. The pictures show a black section on the side where the hump is and a red tail with something white. Zooming in on google maps even further seemed to support the idea that this isn’t the Sunrise scheme. I get the idea they’re not taking any JAL 747-400s to Moses Lake, so it’s my best guess.

Could be a JAL 747. Apparently they used it up until 2009 for training. Doubt the picture is too up to date.

Actually, I take that back. Not knowing how old the photo is, JAL is a possibility as well for a 747-400. One thing I know for sure is that it’s not an SP.

Moses Lake was my first guess without checking Google or reading any of your comments. I’ve spent a bit of time out there in utter awe…..what a cool place.

Might be in Moses Lake where Boeing does their engine tests.