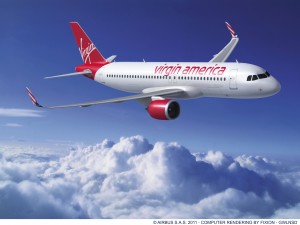 Virgin American has announced they are the launch customer of the new Airbus A320neo with 30 orders of the aircraft. Before the first deliveries of the A320neo start in 2016, Virgin America also has orders for 30 Airbus A320’s with sharklets. This is a huge deal for the relatively new airline.

The Airbus A320neo is the next generation of the A320 family. The aircraft will allow New Engine Options (hence “neo”) which will increase range, lower fuel costs, while allowing airlines to keep a single fleet family of A320 aircraft.

Be sure to check out Dan Webb’s blog, Things in the Sky, as he was recently able to have a chat with Virgin America CEO David Cush and got some pretty interesting information.