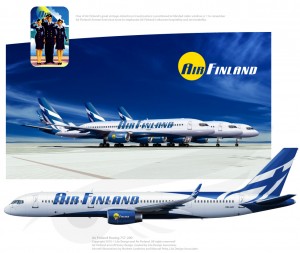 I love it when an airline has a snoozers livery and turns it into a WOW livery. Found some mock-ups on Airliners.net and couldn’t help by share. Take a look at their currently livery. It is not the world’s worst, but definitly not inspiriting. Of course any livery in an air-to-air shot with a Boeing 757 is going to look good. Seeing the livery on the ground isn’t as exciting.

Air Finland is based at the Helsinki-Vantaa Airport in Vantaa, Finland. They have a flee of three Boeing 757-200s that they use in scheduled and charter flights. They were founded in 2002 and started flights in 2003. From Europe they fly to Africa, Canada and Mexico.

UPDATE: The first Boeing 757 has been painted. Here is a photo of the actual plane. Wow, I almost think it looks better in real life vs the mock up! Thanks @APGPhoto.

More good stuff:
* All three Boeing 757’s in current livery photo
* What the three 757’s will look like in new livery
* Larger version of image used in the blog
* Why don’t more airlines do this? 360deg interior tour of their cabin

I remember flying on the old Finnair DC-10 from Kennedy Airport to Helsinki and then onto points throughout Europe in the early 1980s.

I though it was impossible to have a worse livery than the new United, but looking at the current livery, Air Finland has proved me wrong. The new livery looks pretty cool though.