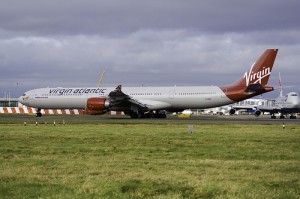 I wasn’t going to write on this topic, but seeing all the airline-hate out there, I just can’t help myself. Once again, passengers get stranded on a plane and all hell breaks loose in the media. Calls for stricter regulations and people saying “I told you so,” with the three hour tarmac delay rule being “right,” and wanting to expand it to international flights. Okay, let’s all take a deep breath and look at the big picture here.

Don’t get me wrong. That experience would bite. The London to Newark (EWR) flight is almost eight hours to begin with. When they got close to EWR, a storm caused them to circle over for about an hour, hoping the weather would clear. It didn’t, so they diverted to Bradley International Airport (BDL) in Hartford, CT. Virgin Atlantic doesn’t normally fly into BDL and the airport doesn’t have a 24hr customs staff that can handle a load of 300 passengers at 8:30 at night.

International passengers are not allowed to be unloaded with out being escorted and processed by customs.Â  So passengers were on the A340 for another 2.5hrs before customs staff could get there to assist.Â  This means passengers were on that plane for 11-12hrs before being allowed off. That is hard. Very hard. Especially when you are expecting to be on the plane for eight hours. I can see why people might be angry and upset, but it doesn’t mean we need to change how the whole industry works.

In this instance, Virgin Atlantic had very few options. They wanted to land at EWR (and I am sure so did the passengers), so waiting for the weather to clear was a good call. They couldn’t have let passengers off at BDL since it was against rules that are not set by them. They could have tried another large airport with a full customs staff, but weather was moving in and fuel had to be taken into consideration. I doubt the pilots wanted to be stuck in the cockpit any longer than they needed either (at least passengers get access to Virgin Atlantic’s sweet entertainment system).

There are reports that the Airbus A340 didn’t have air conditioning and passengers were not being fed. I suspect that there was some reason for the A/C not working and people were fed on the flight over. Again, these are not fun experiences, but nothing close to life-ending.

Unfortunately this just gives ammo for people to demand for stricter rules for international flights. The airline business is extremely complicated and things like this will just happen. It is a risk of flying and a risk of being in this business.

I am all about looking at this instance and seeing if there is anything we can learn about it, but jumping to conclusions and adding regulations that won’t help is not the solution.Â  Let’s say the three hour rule was in effect for this flight. Then what? Either the airline would have gotten a whopping fine or the flight would have refueled and fly back to London.Â  I doubt that passengers would have liked that outcome.

This is very rare when an international flight has to divert to a facility that is not prepared to handle them. There are thousands of international flights that happen all over the world each day and most go flawless. Let’s all take that breath an realize how amazing and efficient our air transportation system is the large majority of the time and how nice it is we don’t see this happen more often.

“Ladies and Gentlemen, because of the new tarmac rules here in the United States ,the fact that US Customs does not want to let you off, and that LAX is still closed, we’ll be returning to Sydney, Australia. We apologize for the inconvenience.” Now that would be horrible. Now I’m not sure why VS could not just refuel, land at BOS, PHL, or IAD but I’m going to guess the crew was about to time out.

If you want to learn more about the new rules proposed by the Department of Transportation and comment upon whether the DOT should extend these rules to international flights, visit http://www.regulation room.org. This it the official site for the public to comment on the new rules for the DOT’s consideration.