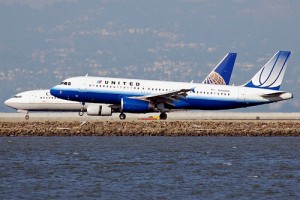 A United Airlines A320-200 lands while a Continental Boeing 737 is in the background.

Back home! It is a good feeling. One downside is I have a week’s worth of stories to catch up on, since I had limited internet access. I figured I would share some of the more interesting stories I found with you, in case you missed them too!

* Aeromexico is cutting flights after the new Arizona immigration reform, via BlueTales.
* United Airlines celebrates 80 years of having flight attendants, via Seattle PI.
* Airlines collected $7.8billion in fees last year. Yes, that is billion and yes, they will not be going away anytime soon, via Today in the Sky.
* The Boeing 787 Dreamliner lands at San Antonio for additional testing, via Randy’s Journal.
* United Airlines and Continental Airlines decide to merge, via Things in the Sky.
* Comparison how the new UAL/CO merger stacks up to its competition, via Airline Biz Blog.
* UAL/CO merger compared to TWA merger, via AviationWeek.
* Continental CEO apologizes for calling US Airways the ,”ugly girl,” via Today in the Sky.
* Monitor what your kids are watching, while flying, via Runway Girl.
* Video re-creation of the Turkish Airlines crash in Amsterdam last year, via Flight Global.

Anything else interesting happen that I might have missed?