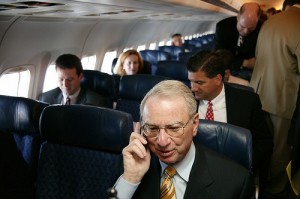 US Representative Peter DeFazio (D-Ore) is looking to make sure talking on a cell phone during flight is not allowed. The bill’s name is Halting Airplane Noise to Give Us Peace Act — or HANG UP. DeFazio defends the bill, saying, “With airline customer satisfaction at an all-time low, this is not the moment to consider making airplane travel even more torturous by allowing in-flight cell phone conversations.”

He has gained support from the National Business Travel Association, the International Airline Passengers Association and the Association of Flight Attendants/Communications Workers of America. Not surprisingly, the majority of the opposition is coming from an organization comprised of people from the telecommunications and satellite industry groups. The group’s executive director Carl Biersack stated, “I’m not here to defend how airlines treat you and how much they charge for baggage and pillows. I would not agree with the premise that having a cell phone on an airplane is an annoyance.” He continues stating that an airplane cabin is already filled with noise and having a conversation on a cell phone would be just as much of a distraction as talking to someone next to you.

But is that really the case? In my personal experience people seem to talk much louder on cell phones than talking to a person next to them. You also don’t hear people saying “are you there, I think I lost you,” while having an in-person conversation. Even if someone can stay quiet on the phone, their ringer wouldn’t be quiet. It would be nearly impossible to get some sleep or work done with cell phones constantly going off.

People opposing the measure feel it would allow folks to make new plans, if a flight is delayed or keep in touch with loved ones. However, with the spread of Wi-Fi on airlines, people already have the ability to stay connected. They can email, chat, and do more than they could on a phone. Companies like Aircell that provide Go-Go inflight Wi-Fi doesn’t allow passengers to talk over the internet, blocking programs like Skype and voice function on Google Chat.

I agree with Mr. DeFazio that talking on cellphones should not be allowed on airlines, but do we need legislation for this? I am not as sure about that. Already, the FCC bans the use of cell phones  and it seems the majority of fliers don’t want to sit next to someone on a cell phone.  Should this be something the government has control over or should the airlines be able to make the decision themselves?

I think it is completely up to the airline companies themselves. This is not something that government should be intervening in. Apparently US Rep. DeFazio has a little too much time on this hands.

Yes, we do need legislation. Without a law to protect our personal rights it will never happen. I have already seen people using programs to talk on the internet. These programs are designed to bypass the FCC rules. Aircell/Gogo do not do anything to stop it because Aircell originally wanted internet phone service and counted on it before the FCC shut them down.