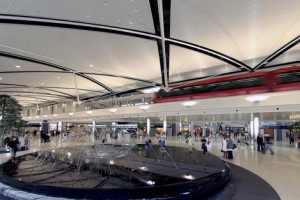 The tram wizzes by at Detroit's airport. Photo from DTW.

Recently I was hanging out at Austin-Bergstrom International Airport (AUS) waiting for a flight back home and I became annoyed that their airport did not provide free Wi-Fi internet. Oddly the airport did have free wired terminals were folks could check their email. I have become a spoiled traveler. Seattle-Tacoma International Airport (my home base) has had free internet for quite some time. The more I travel the more and more I start finding free wireless access at airports. Heck, while waiting for the bus in Austin to go to the airport, I got free Wi-Fi from the city of Austin while standing at my bus stop.

I was voicing my frustration about no free Wi-Fi at AUS via Twitter, when Scott Wintner, who works for Pubic Affairs for Detroit Metropolitan Airport (DTW) and Willow Run Airport (YIP), reached out via Twitter and wanted to share why many airports do not offer free Wi-Fi. He pointed out that Wi-Fi isn’t free and not all airports can afford to give it to passengers without charging. I decided to try and learn more about why more airports don’t have free Wi-Fi and Wintner was more than happy to help out. Here is our talk:

AR: Who is it through?
SW:  Concourse Communications (now part of Boingo)

AR: How much does it cost a passenger to get internet?
SW: The rates are established by the provider (Boingo), which currently offers several different rates and packages. You can find all of their rate/package info online at www.boingo.com (there are many to choose among). It’s important to note that, because we use one of the leading global providers, internet purchased for use at DTW also works at hotspots around the country and, with some plans, the world. Plus, customers who already have a Wi-Fi plan with another carrier with which Boingo currently has roaming agreements (such as AT&T, T-Mobile, etc.), you can login to our Wi-Fi using your existing account.

AR: How much does DTW get from each internet purchase?
SW: That’s a complicated question because it’s not as simple as a flat % or sum per transaction. So, the best I can offer you will likely be an annual total’¦ which our finance folks are working on for me now. Please standby’¦

AR: How much did it cost DTW to set up Wi-Fi?
SW: It didn’t cost the Airport Authority anything because the system was developed by the provider (Boingo). They may be able to provide you with more info about how much a system such as the one in place at DTW costs to set-up and maintain.

AR: Does “free” Wi-Fi even exist?
SW:  There is ’œno such thing as free Wi-Fi’. A wireless internet infrastructure costs money to develop and maintain’¦ no news there. So, that cost has to be paid by someone. When you stay at a hotel that offers free Wi-Fi, you can bet that the cost of providing the service is merely baked-in to their operating costs and reflected in room rates. Likewise, when you go to a coffee shop, etc., that offers ’œfree Wi-Fi’, the cost of providing that service is assumed in the price you pay for a latte or a bagel there. Of course, a for-profit business could elect to absorb the cost of providing Wi-Fi by paying for it out of profits rather than charging more for their goods/services. I don’t think it’s likely for many businesses to choose that option. But, either way, someone is paying for the cost of providing internet ’“ and generally, it’s the customer.

AR: How do airports differ?
SW: Unlike hotels (which charge for a bed) and coffee shops (which charge for caffeine), airports do not charge their customers to use the airport. Yes, airports do charge for ancillary services such as parking and food/beverage/retail, but those services aren’t the airports primary reason for existing. Airport customers can ’“ and many do ’“ pass through the facility without spending a dime. So, airports can’t just jack-up their nightly rate or their admission fee to cover the costs of providing free Wi-Fi ’“ there are no such fees to raise. Sure, airports could jack-up the price of parking and concessions to cover the cost of Wi-Fi ’“ and many probably do.

AR: Can’t the costs be added to the airline’s fee for flying to an airport?
Raising airline costs at airports creates a whole separate set of effects. At minimum, those added airline costs become reflected in ticket prices. But, in most cases, added airline costs become a huge disincentive for airlines to expand (and in some cases even maintain) air service at that airport’¦ which could lead to fewer options and less competition (read: higher prices). In either case, travelers are ultimately paying the bill.

AR: Why has DTW decided not to provide “free” Wi-Fi?
SW: While finding a way to cover the cost of providing Wi-Fi is one thing, here in Detroit (as at many airports), we take it a step further. Much like parking, food and retail, we approach Wi-Fi as an important revenue stream. It’s not a matter of lining our pocketswe don’t make a profit and haven’t run a surplus in our 100 year history. Meanwhile, we have an incredible airfield here and two beautiful, new terminals that need to be both paid-off and maintained. We get a lot of kudos on our facilities here, and both travelers and airlines appreciate that we rarely have delays to due capacity issues at DTW. But, maintaining J.D. Power & Associates #1 Airport in customer satisfaction takes money. We have to get it from somewhere’¦ and, for the reasons I described above’¦ it’s incumbent upon us ’“ for the good of the community ’“ to generate as much revenue from non-airline rent sources as possible.

AR: How much does Wi-Fi factor into the airport making money?
SW: Wi-Fi is a tiny percentage of our overall revenue, but it’s something ’“ and, it at minimum pays for itself. We hope it can pay us even more, because our customers enjoy the things such revenue is used to pay for (i.e., heat, hot water, clean bathrooms, working escalators, a tram that whisks connecting customers through the mile-long Concourse A in 2 min to make their connection, clear runways, top-notch safety and security systems, etc.)

AR: Why do any airports provide “free” Wi-Fi then?
SW:  To that question, I refer you back to my first key point ’“ it’s not really free. How do some airports justify increasing costs elsewhere to cover providing free Wi-Fi? That you’d have to ask other airports. But, for smaller airports, it’s often for competitive reasons. Lots of people say to me, ’œI can’t believe you don’t have free Wi-Fi’¦ even the tiny LANSING airport has free Wi-Fi,’ ’“ as if to suggest that a smaller airport would be the last to offer such a service. In reality, those smaller airports need to find ways to incentivize travelers to use them (and I say ’œsmall’ loosely ’“ airports such as OAK are actually not that small, but they are the ’œlittle guy’ competing aggressively for Bay Area traffic). In their case, airlines aren’t likely to serve their airport unless the airport can show that travelers demand such air service. The economics of the smaller ’œspoke’ airports are just entirely different than hub airports.

AR: Is there anything else travelers should know about DTW?
SW: Despite being a major hub for Delta (their second-largest), and formerly the largest for Northwest, DTW has an impressive roster of other carriers. Since we became an independent Airport Authority in 2002 (which largely affected our economics in terms of a focus on lowering airline costs), we’ve added service by Frontier, AirTran & Air France’¦ and have gained new service on Southwest, Spirit & US Airways. All of those carriers fly routes also and already flown by NW/DL, which means we’ve been able to keep the economics to these carriers good enough to take-on an established hub carrier in their own hub and not only be successful, but GROW. That’s not easy to do ’“ look at CLE today, MSP (until very recently), EWR, etc. We’ve done it with our focus on low-cost operations. We’re not the Nordstrom of airports’¦ we’re more like the Target of airports. People fly out of DTW because they know they’ll get great rates and good service with LOTS of options all under one roof.

Hmm, okay I guess I have to be forgiving of this. How can I say it is alright for airlines to charge fees on things, since I shouldn’t have to pay for what I do not use, when I demand “free” Wi-Fi at the airport. It might be a bit selfish of me to ask others to help pick up with bill for Wi-Fi when not everyone will be using it. Just it can be difficult to pay out $10 for airport Wi-Fi, then another $10 for Wi-Fi on the plane. Of course, no one is forcing me to pay for it.