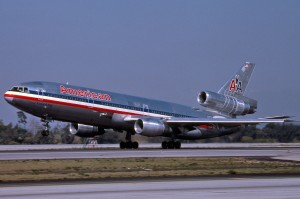 We departed out of Seattle, WA for an uneventful trip to New York on an American Airlines DC-10. The airline had a new promotional program called “the bottomless wine glass”. The bottomless wine glass meant there was an unlimited amount of free wine available for the duration of the trip. On the trip to New York we were very responsible drinkers. Our return trip was to be a horse of another color.

The flight was seemingly uneventful with us consuming copious amounts of wine until the start of the in-flight movie. Neither of us opted for a headset as that would have cost a few dollars and we were too busy talking about solving “the world problems” anyway.

The movie started and Gary said that he had recently seen it and from that point on gave a running dialog on the movie since I hadn’t seen it. I’m sure all those around us were totally put out, but, no one said a thing to us.
We continued to drink all the way back to Seattle. In those days there was no such thing as being too intoxicated on a plane; or so it seemed. After landing, I quickly exited the plane thinking Gary was right behind me. I waited at the top of the ramp for what seemed an eternity. Finally, I saw Gary being helped by two flight attendants up the ramp. They brought him over to me a relayed the following events.

Upon exiting the aircraft Gary waited at the aircraft exit door for me to deplane. After everyone had departed the aircraft they closed the door and proceeded to coach Gary up the ramp toward the terminal. Gary then “broke’ free and went back to the aircraft door and started banging on the door and calling out for me. He emphatically told the attendants I was still inside. He was so adamant about me still being onboard they opened the aircraft door and escorted him inside to a totally dark cabin. Still insistent and sounding threatening, Gary made them do a walk through the plane with him.