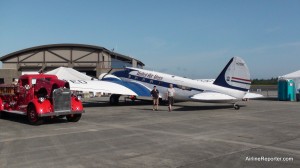 What a beautiful and sunny day to be hanging around a bunch of airplanes and aviation enthusiast. This Saturday I was able to spend a few hours at Paine Field for the General Aviation Day put on by the Washington Pilots Association and Snohomish County’s Paine Field.

Unfortunately I had to leave after a few hours because of other engagements, but Liz Matzelle (@ImperfectSense) was there to take wonderful photos of the aircraft in flight [which is great, because Liz has a wonderful eye when it comes to photography and took better photos than I could have :)]