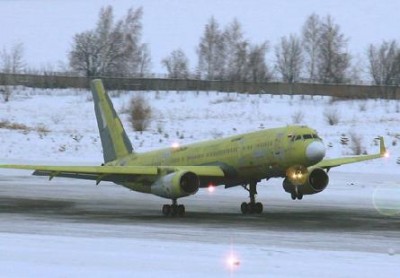 The Tupolev TU-204 first flew in January 1989 and was delivered in December 1994. It was built to replace the aging TU-154 and is seen by many to very similar in looks and performance to the Boeing 757. The TU-204SM is a twin-engine, single-aisle, medium-range aircraft that is able to hold around 210 passengers. Red Wing Airlines, based in Moscow, runs the largest fleet with eight aircraft and 45 more on order (44 of which are the SM). It was the first airline to purchase the TU-204SM, but it will not be the first to take delivery. Moscow Airlines (aka Atlant-Soyuz Airlines) will be the first to take delivery hopefully in 2011.

The TU-204SM took her first flight on December 29, 2010. The new 204 uses the Russian-built Aviadvigatel PS-90A2 turbofan. Around 70% of the aircraft has improved equipment vs the base TU-204, meaning although it looks similar to the original TU-204,  Tupolev says this latest version is essentially a new aircraft. With the addition of new equipment, one of the biggest changes for the aircraft is going from a three person to a two person cockpit. United Aircraft, which is a joint stock company that Tupolev is a part of, stated, “The test programme established for the first flight was successful. The aircraft landed at precisely the appointed time.”

At the time of the first flight, it wasn’t sure if the new model would make it to production. But after a strong commitment, made by Red Wings Airlines, the Russian government has given authorization for the TU-204SM to be produced. Tupolev hopes to use the new TU-204SM to learn about technologies that could be used on the United Aircraft MC-21, set to start production in 2016. “It will become a transitional project,” says the ministry’s aviation department chief Yuri Slyusar. “It should help preserve competencies in building mainline aircraft and provide for testing technologies to be applied on the MS-21.”