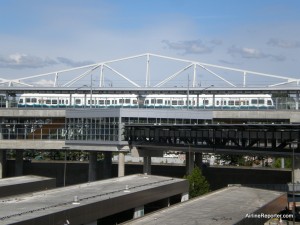 Seattle’s light rail hasÂ  had a difficult history as well, but luckily they were able to work out the problems.Â  Link Light Rail started in 1996 when voters approved an increase in taxes for a 25 mile light rail system. Dogged by environmental and financial issues as well as people from the communities affected complaining, the first part of the system was not opened until July 2009 and even then, it didn’t connect to Seattle-Tacoma International Airport (SEA). 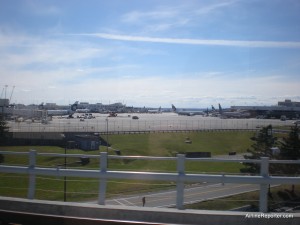 Finding the train at the airport was easy with the signs, but it was quite the walk to get there. Paying was a little complex at first, but there are machines you can use cash or credit card, choose what stop you want to go toÂ  and pay the proper amount. There is no one to check your ticket to enter the train, but about half way to downtown, three fare enforcement officers came on board to confirm we were all paid up. 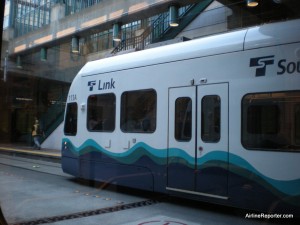 The trains are new and comfortable to ride in. I was surprised not to see any ads in side the car I was in and asked Bruce Gray,Â  a spokes person for Sound Transit (who runs the Link Light Rail), about the ads. He told me via email that many trains do have ads inside and they will have their, “first wrapped train with advertising on the outside should be rolling this week.”