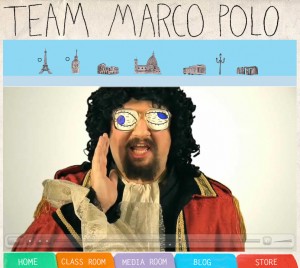 Ah, to travel the way it used to be. Think you have it hard now with little leg room and peanuts? Go back to the late 1200’s and travel with Marco Polo, talk about having it rough. I am sure he would have LOVED to pay for a little bag fee to travel 4000 miles in a few hours versus three years.

Anyhow, Mr. Polo recently celebrated his Birthday and the fine folks over at Team Marco Polo made a fun celebration video (there might be someone familiar at the Future of Flight in that video). I talked about this very funny Seattle based kids travel show a while back and they are still moving forward.

I recently connected with film studio Filmetria, which is based here in Seattle and fell in love with new project: Team Marco Polo.

I know it is not exactly airline-related, but it does deal with travel and I think it is frek’n cool, so I am sharing it with you (and no I am not getting paid to write this, thank you).

It is a travel show for kids, but it is quite entertaining for adults too. It is as if Bill Nye The Science Guy, Steve Ricks and a barrel of laughs sat down and created a show. One of the main people behind the show, Bill Jeakle,Â was a writer for Bill Nye’s show and if you are a local Seattlite, you might also remember him as one of the high-5’n white guys on local comedy sketch show Almost Live (I am working on getting a picture of me giving Bill a high-5).

Anyhow, the MarcoÂ Polo character gives people a way to learn about travel without being bored. Â There are many other characters, as well: Â a Rick Steves spoof (he gives travel tips), a Tim Gunn Project Runway spoof (he covers fashion), an art loving nun, A bombastic history professor named Professor Bombast, Shakespeare, Voltaire, Leonardo, Michelangelo, Odysseus, and dozens more. Â They all do skits and songs to bring the art and culture of foreign lands to life.

Currently the show is only on YouTube, but they are hoping to change that. They are working with Seattle’s local PBS station to get the show on the air.

If you like what you see, please support their efforts. You can add them on Twitter, join their YouTube channel to know when new episodes are posted and of course watch and enjoy the show.