The Boeing 787-10 seen in Dreamliner livery. Composite image from Boeing.

At the Paris Air Show today, Boeing officially launched the longer version of the Boeing Dreamliner: the 787-10. According to Boeing, “Customer launch commitments for the 787-10 include Air Lease Corporation, with 30 airplanes; GE Capital Aviation Services, with 10; International Airlines Group / British Airways, with 12 subject to shareholder approval; Singapore Airlines, with 30 and United Airlines, with 20 airplanes.”

The 787-10 becomes the largest of the Dreamliner family with an additional 20 foot stretch over the 787-9, seating for 300-330 passengers and the ability to fly up to 7,000 nautical miles. The new model is slated to complete final assembly and test flights in 2017 with first delivery in 2018. 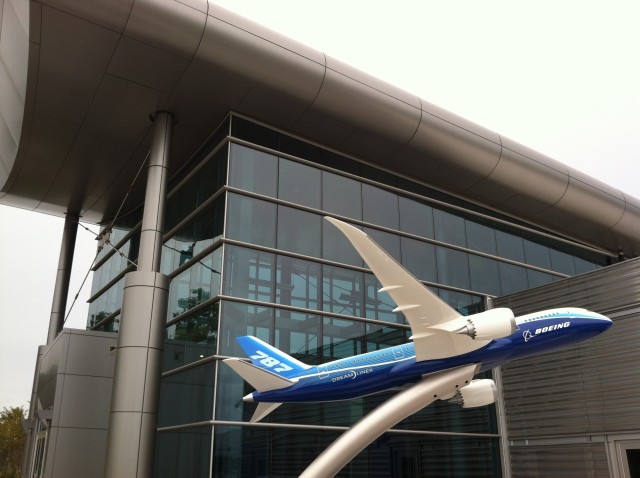 I recently visited a Boeing Factory. No, Iâ€™m not talking about Renton or Everett, but in South Carolina.

Covering almost 11 football fields and completed in mid 2011, Boeing’s â€œotherâ€ factory for manufacturing the new 787 Dreamliner is located in North Charleston, South Carolina on property bordering Charleston International Airport and Joint Base Charleston.Â  I had the opportunity to stop by during a business trip recently and let me tell you, this facility is impressive.Â  According to Boeingâ€™s web site, â€œBoeing South Carolina fabricates, assembles and installs systems for aft (rear) fuselage sections of the 787 Dreamliner and joins and integrates mid-body sections from other partners.â€

These partners include companies located in India and Japan.Â  While I wasnâ€™t able to tour the facility during my trip, I did take a short visit to the visitorâ€™s facility and grabbed some pics of the lineup near the fence line.Â  I just happened to miss the second 787 Dreamliner to depart for India by only one day.Â  I also missed the departure of the Dreamlifter with its precious cargo bound for Seattle, but I hope to catch one in the future. 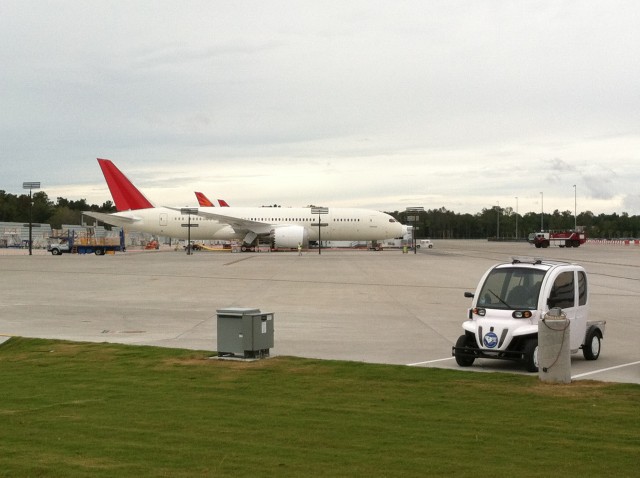 Since green is the name of the game these days, Boeing designed this facility to be as environmentally friendly as possible.Â  The final assembly building was fitted with solar panels that are capable of generating enough electricity to power 250 homes with a peak energy output equal to 200,000 13-watt watt bulbs.Â  In addition, Boeing has a zero waste program where recycling and reuse is the norm, creating zero waste to landfills from the facility as a whole.Â  Quite impressive for such a large manufacturing facility.

The visitorâ€™s center unfortunately is for those with permission to enter the site.Â  I had hoped to see a retail store, room full of Boeing paraphernalia and models for sale.Â  It is too bad that the store is behind the fence, far from public eyes. The visitor center is more a front gate for those seeking security badges or meeting Boeing employees.Â  They did have a very nice facility with a roof in the form of a 400-ft long wing, an outside small display with the history of Boeing, and a large scale model of the 787. 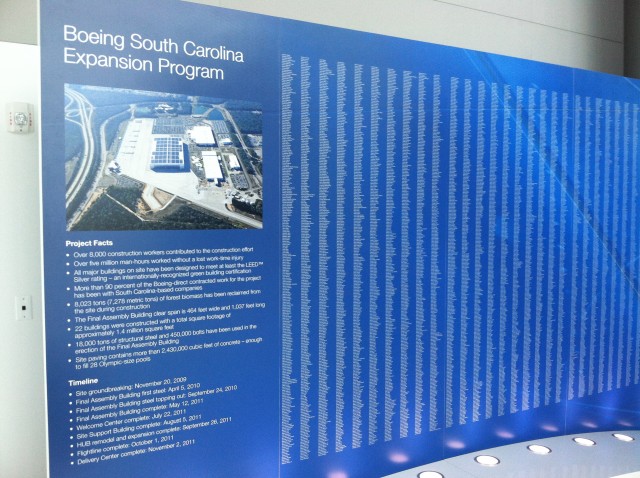 A very courteous Boeing employee was kind enough to talk with me as he was leaving for the day.Â  Boeingâ€™s Charleston facility is the only location currently in the world where the 787 tail assembly is manufactured.Â  Boeing ships the tails to Everett where theyâ€™re assembled. Similar to Everett, all the parts are shipped here to Charleston for assembly.Â  At the present time, Boeingâ€™s manufacturing is only capable of producing one 787 per month.Â  But, they hope to eventually ramp that up to one every six days, similar to the Everett Washington facility.

From public areas, I did spot some red tails (not the movie) in the lineup area and took a drive over, stopping outside the fence to snap a pic of the lineup.Â  What an impressive sight!Â  I was excited just to be in the same state as these fine aircraft. I cannot wait until my next visit. 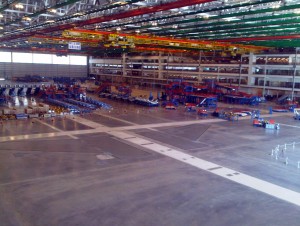