We are getting closer and closer to the Boeing 747-8 Intercontinental’s first flight. Boeing is preparing for the date and on January 8th, completed their first practice flight of the actual airplane. No, you didn’t miss the first flight of the airplane, the test was totally done on the ground, in the Boeing factory.

This was the first time all all the onboard systems were tested at the same time during the factory gauntlet testing and everything went well.

From what I am seeing, we should be seeing the rollout of the plane maybe in the next few weeks and hopefully first flight shortly after that. 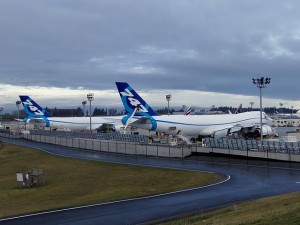