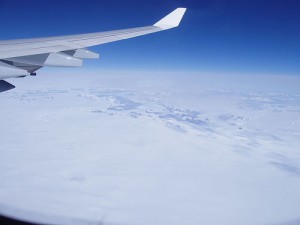 It looks mighty cold out there!

The Library of Congress shows that Matthew Henson was the first person to reach the North Pole on April 6, 1909. It took him eight attempts to finally make it to the North Pole. The journey was difficult and I bet he never imagined that a little over 100 years later an airline could have flown over the North Pole region 10,000 times. United Airlines flight 898 from Beijing to Washington, DC marks their 10,000th polar flight.

Today in the Sky points out that United Airlines has quite a few daily flights on four polar routes: Chicago-O’Hare Beijing; Chicago O’Hare-Shanghai; Chicago O’Hare-Hong Kong; and Washington Dulles-Beijing. The routes and flights didn’t come easy. In 1999 with the combination of better technology and better cooperation from Russia, UA were able to start the first of these first flight in Jan 1999 from Chicago to Hong Kong.

Polar flights are able to save time, fuel and money. Currently United Airlines only flies about 20% of the polar flights worldwide.