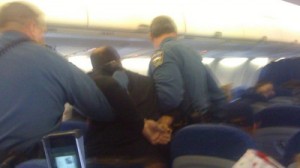 Just getting drunk, unruly, and causing a flight to divert just doesn’t seem to do it for me anymore.Â  Well a Virginia resident, Muhammed Abu Tahir is taking it to the next level. He was on Air Tran flight 39 from Atlanta to San Francisco and decided to have a few (and by a few I mean five) airline-sized bottles of wine. Anyone having that much wine is mostly going to use the lavatory at some point.