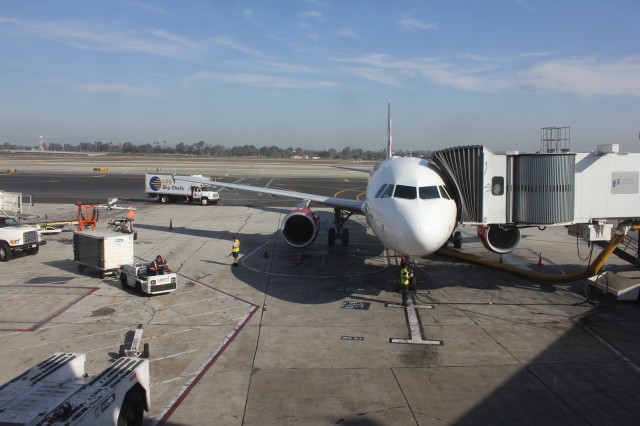 Cheers: Best domestic first class product, hands down.
Jeers: Please wash your windows.
Bottom Line: You get what you pay for and you shouldn’t feel bad paying for this. 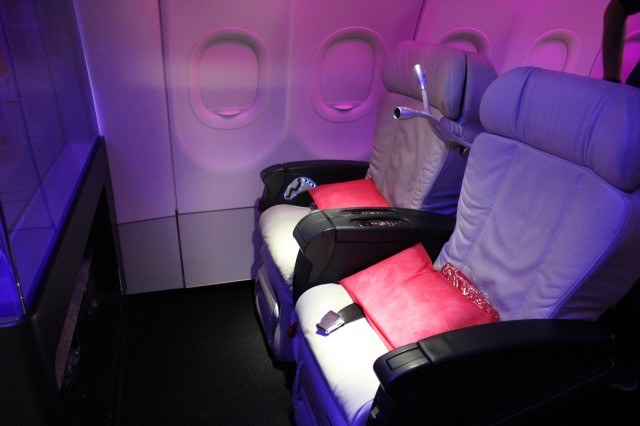 It has been a while since I have done a review on Virgin America and when I recently flew from SEA to LAX for #Dorkfest, I decided it was time for another review.  I have flown Virgin America quite a few times, but always at the back of the (air) bus. I was hoping to review their premium product; First Class and luckily I made it work out. (Note: I paid for an economy ticket and was upgraded one-way by the airline to do the review).

Having a premium ticket gave me access to use the TSA priority line at SEA. My flight was leaving at 7:10am on a Saturday, so the priority line only saved me about a minute.

After getting through security with a first class ticket, do not expect lounge access. There is no lounge for Virgin America passengers in Seattle and lounges in New York, San Fransisco and Washington DC will cost you from $35-$75 to enter, even with a full fare first class ticket. 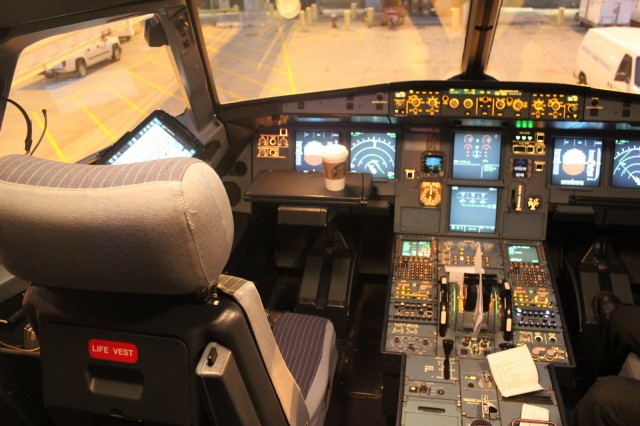 Have to love the Starbucks coffee sitting on the tray table in the Virgin America flight deck.

I was running a bit late and missed the first class priority boarding period. When doing a review, I prefer to board as soon as possible (or get pre-boarding access), but luckily the front cabin was still empty when I entered the A320.

It never gets old boarding a Virgin America flight. Where most other airlines welcome you with white lighting (snoozers), Virgin America gives you a pink and purple feast for the eyes.

Hunting down my seat, 1A, was not too difficult. After taking some photos and settling down I watched as the front flight attendant, Justin, was interacting with the kids boarding the plane. One was dressed as a superhero (seriously rad) and he was invited into the flight deck, but wasn’t having it (even super heroes have bad days I guess).

Every other child that boarded was given a similar invite, which most agreed. Well heck… I finally asked if adult-kids can go see the flight deck as well and I was more than welcome to do so. I have found that Virgin America is pretty welcoming to pre-taxi flight deck visits, which many other airlines are reluctant or just do not allow it.

After the kid in me got to check out the front of the plane, I was back to enjoying my pre-flight drink (coffee) and see what my seat has to offer. 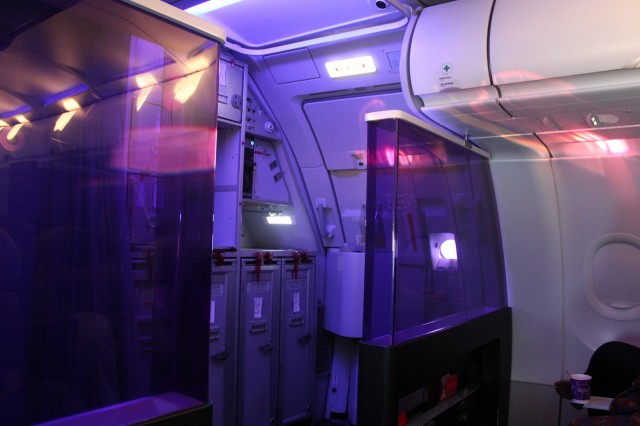 If you love purple, you will love Virgin America first class. I had to take pretty photos inside the cabin, since taking photos of the outside weren’t happening.

The safety video, which features Richard Branson’s voice, has been playing for a while now, but I haven’t quite gotten sick of it yet. However, I wasn’t able to watch it on this leg of the flight. Those in first class can hear the video, but a flight attendant shows the safety features, since the TVs remain in the armrest.

My biggest problem with the entire flight were the windows being filthy. Not a huge deal for your average traveler, but one that needs (okay, maybe wants, but it feels like a need most times) to take photos out the window. The pain became much worse when our flight flew right by Mount Rainier and out of about 30 photos taken, none of them turned out remotely decent. At least there were great things to distract me inside the aircraft.

No matter what cabin you fly in, passengers get access to free satellite TV, games, ability to order food from the screen and some of the other things that make RED awesome. The bonus of being up front is all the on-demand tv and movies are included in the price of the ticket. 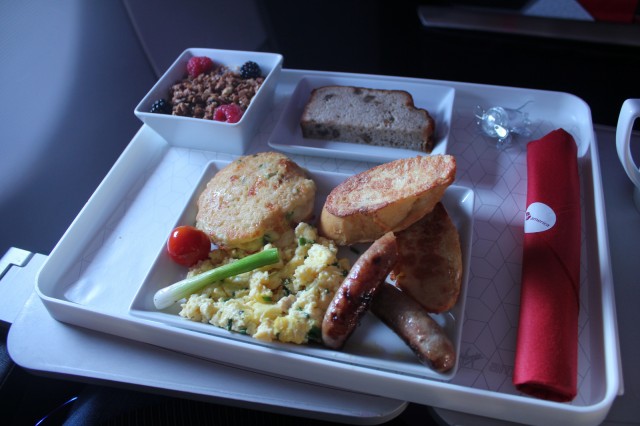 Probably the best banana bread I have had. How did they keep it so moist?

Talking about free; you also get free drinks and food. And we aren’t talking about a meal in a box food here, we are talking real food — the best I have had domestically.

For breakfast, I decided on the steel-cut oats (not sure what that means) and American breakfast: “Chilled steel-cuts oats tossed with oranges, apples, maple, walnuts, dried cranberries  cherries, currants, and creamy yogurt, topped with multigrain granola, raspberries, and blackberries. Served along cage-free scrambled eggs finished with chives and cream cheese, accompanied by cheddar hash browns, apple and chicken sausage, roasted tomato, grilled green onion and mini French toast filled with vanilla and orange cream.” Dang, that is impressive — remember this is on a flight from Seattle to Los Angeles.

They even had Glenlivet 12 year old scotch, which is rare to even find on an international business class flight. Only if it was later in the day, I would have enjoyed it, but some OJ and coffee sufficed. 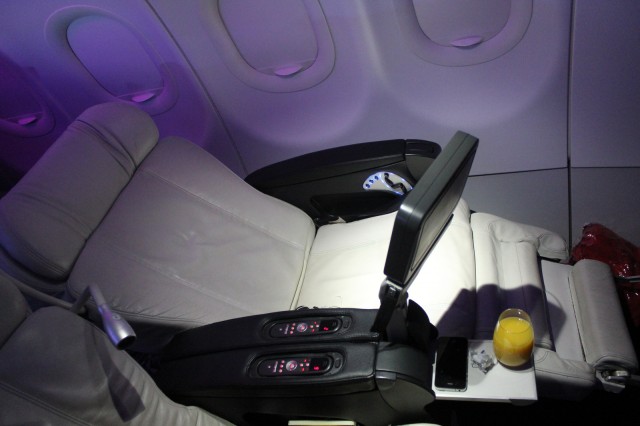 It is hard to remember this is a domestic product. Sure, the seats do not fold flat, but they get quite comfy.

If you want to guarantee a seat up in the front, make sure you purchase your first class ticket well in advance. If you are willing to take the risk, you have the ability to grab an upgrade for pretty cheap.

I have had no problem stating that I feel Virgin America has the best domestic economy product and I am happy to say the same about their First Class product. I am not one that has a ton of money to throw around, but I would feel okay spending the extra money for this product.