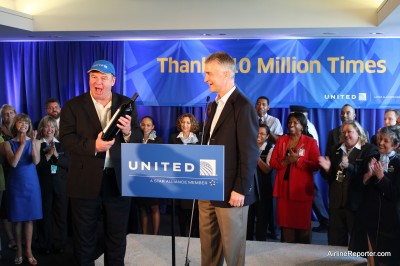 Being a “frequent flyer” can be different for each person. Maybe you make a few flights down the coast each year or you see yourself flying around the globe weekly. Many airlines have a way of treating their best frequent fliers like royalty, but who is the king of kings? I would have to say that Chicago based automotive sales consultant Tom Stuker, who reached 10 million mile status on United Airlines over the weekend, is undisputed frequent flyer king.

How much is 10 million miles in a lifetime? A lot — one heck of a lot. There are a handful of folks who have crossed the 3million mile mark on United, but no one has come close to Stuker’s 10 million. United can’t officially confirm it, but it appears that Stuker has flown more miles, as a passenger, than anyone else in history. To make the 10 million mark, Stuker has been a member of United’s Mileage Plus since 1982 and has flown almost 6000 flights, with 200 trips to Australia alone.

Honestly, when I was invited to celebrate Struker’s 10 millionth mile in Chicago, I wasn’t really sure what to expect. I figured a person who flies so much might have a bit of a jaded view on air travel — boy was I wrong. Upon arriving to Chicago on United flight 942 from Los Angeles, Stuker was greeted by United’s President and CEO Jeff Smisek and a whole entourage of other people. Before he de-planed, it was quite the spectacle and people gathered around not knowing what they were watching. A few girls actually came up and asked if Justin Beiber was getting off the plane. Heh… no, but someone much cooler was — the girls did not seem that impressed.

Stuker was escorted to a special section in United’s Red Carpet Club to even more people waiting. A lot of nice words were said, but really Stuker’s speech was quite surreal. He was a truly genuine guy and multiple times had to stop because he was tearing up. It was obvious that he saw United as a part of his family and even though he has met so many people he was able to thank many by name — from the CEO to baggage handlers it was quite impressive. Even with all the miles flown, he still has a strong love for flying.

Probably the most powerful part was when he had a hard time talking about when United went through difficult times with bankruptcy and employees having to make great sacrifices to keep the company alive. He is happy to see United’s bright future after the merger and wants to continue working on his miles. Even after his 10 million miles flown, Stuker stated that United had never lost his bag — quite the impressive feat.

During the celebration he was given the first and only United Titanium Card for hitting 10 million miles. He was also given a few nifty other presents, but probably the best was getting his name put on the side of a United Boeing 747-400 (N127UA). You know you have made it in life, if your name ends up on the side of an airliner (at least by airline geek definitions).

Uber frequent flyers like Stuker have a very different flying experience than most travelers. They get VIP treatment that rivals, or even beats, flying on your own personal jet. Many of you might experience a gold (or some other precious metal name) membership which treats you pretty darn well, but it can’t compare to when you are invited to the airline’s totally VIP and secretive super mileage club. 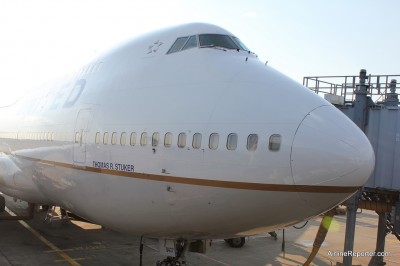 This moment is truly a special part of airline history and it was great to be a part of it. Even though I love flying, I am not sure if I would stay sane doing about 700,000 miles per year. So cheers to Mr. Stuker and United for passing this milestone and hopefully there will be many more miles to go.

CHECK OUT ALL 11 PHOTOS FROM THE UNITED AIRLINES EVENT