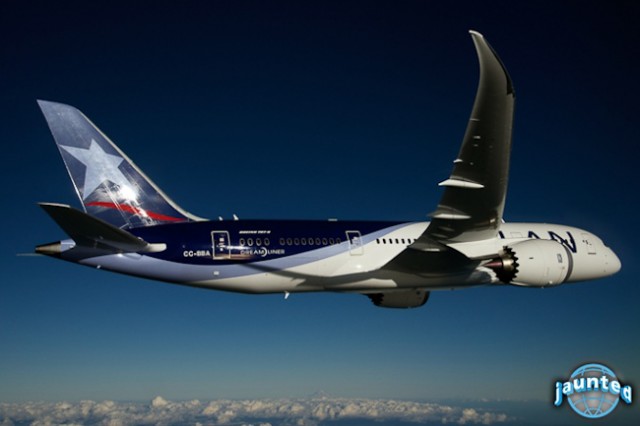 Have you ever been on a flight and spotted another flight off in the distance? It’s just the coolest thing to see another plane in midair; they become your friend for a few minutes, as if you’re sharing the delicious secret that 38,000 feet isÂ theÂ place to be. And it is. Now imagine that flying alongside other airplanes was an everyday occurrence for youâ€”even better, that it’s your job. This is actually the case for the badass pilots and aerial cinematographers atÂ Wolfe Air.

Thanks to our buddy David Parker Brown ofÂ AirlineReporter.comÂ and the team at Wolfe Air, we were able to go beyondÂ watchingÂ theÂ LAN Boeing 787 DreamlinerÂ delivery flight toÂ participatingÂ in it while discovering how Wolfe Air makes their magicâ€”the magic of capturing the Dreamliner on film, in flight, from a few hundred feet off the raked wingtip. 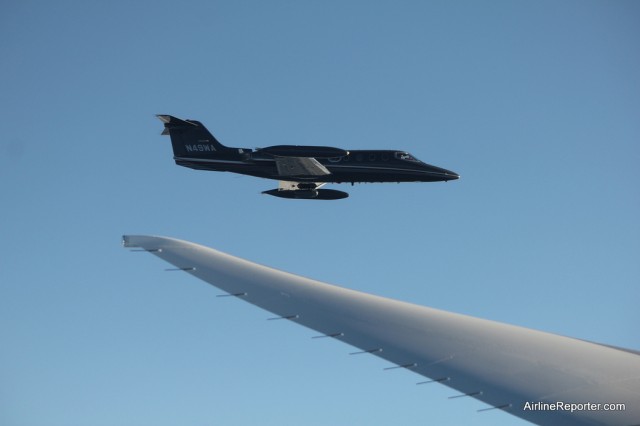 Though Wolfe Air has an arsenal of three aircraft, it’s theirÂ Learjet 25BÂ that’d be our whip on this trip. From a distance, the slick plane looks jet-black; up close it’s actually a smart charcoal gray to eliminate glare and reflections on other aircraft. Typically based at Hawthorne Airport outside Los Angeles, the Lear has specially flown up to Everett, WA’s Paine Field this day, in order to fly out ahead of the Dreamliner, circle back around and join up with the plane as the 787 heads out over the Olympic Peninsula.

Erase any preconceptions of private jet interiors from your mind. Wolfe Air’s Learjet is all business on the inside, and its ability to shoot IMAX, hi-def, Vectorvision, and digital stills means that camera equipment has booted the leather seats and champagne bar. And thank god for that, because theÂ serious G-forces we felt on some turns to position for shots aren’t for your average bizjet. 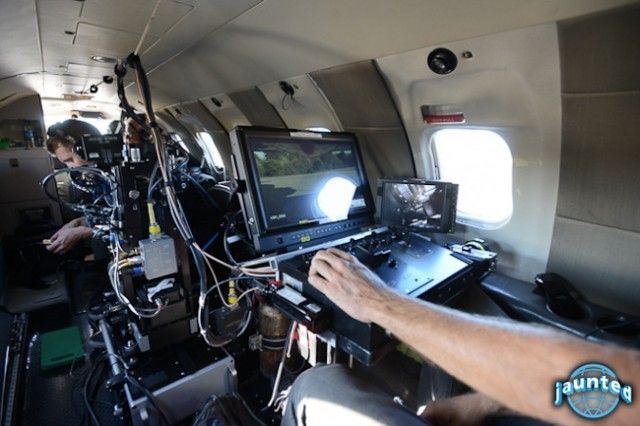 Curious to check out more of Wolfe Air’s work? Just hit up Netflix, as Wolfe are the people behind the in-air filming that makes movies likeÂ Air Force One,Â TransformersÂ andÂ Thirteen DaysÂ so awesome. Not to mention that Wolfe has actually had a hand in NASA’s preparations for theÂ Mars Curiosity RoverÂ (more on thatÂ here).

Disclosure: We were at the delivery of the LAN 787 Dreamliner as guests of Boeing and LAN Airlines and a guest of Wolfe air onboard the photo flight, but all photos, video and opinions are strictly our own. [Video:Â Joe Corrigan/Omega Pictures. Photos: Joe Corrigan, Cynthia Drescher andÂ David Parker Brown/Airline Reporter]