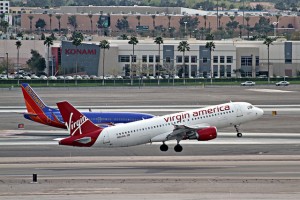 I couldn’t care less what celebrities do on airplanes. You see them all the time in the news getting in trouble. I hate the idea that I am writing about a celebrity and an airline, but I just can’t help myself. Back in February Director Kevin Smith had a little issue with Southwest Airlines and I managed to not write anything on it, even though I had a lot to say. In case you missed it, Smith was on a full Southwest flight and the flight crew made the call that he was a bit too large for one seat and was asked to leave the plane since there was no second seat available. Smith used his 1.5 million Twitter followers at the time and fame to turn the incident into a huge deal. Southwest tried to work to make him happy, but it only caused him to get more upset. Many were delighted that Southwest stood up against passengers of size and others felt they were being too harsh. I just found it interesting that Smith had a new movie coming out around the same time.

Smith declared he would never fly Southwest again and from what I have heard, he has kept his promise. Yesterday Smith had a flight on Virgin America from New York to Los Angeles and ran into a little trouble. In an open letter to the airline on his blog, Smith stated that he and his guests arrived at the airport an hour before boarding time. Since they were early they headed to the lounge to relax. Boarding for their 11:45am flight started at 11:15am  and they arrived at the gate at 11:35am to find the gate agent was in the process of closing the door. Smith had hired a concierge to make sure he boarded the plane last so people wouldn’t gawk at him being on the aircraft. He states that his concierge does this all the time and boarding 10 minutes before departure is standard procedure for clients.

On his first rant at 2:00pm, Smith stated that he will be avoiding Virgin America, “like the plague.” It was almost like history repeating when he described how he flies so much and spends so much money and no one he knows will ever fly on Virgin America or Virgin Atlantic again. Of course us airline geeks know they are separate companies with similar branding, so it doesn’t mean too much. By the time he landed in LAX at 5:10pm his tone changed a bit. He stated, “@VirginAtlantic [sic – guessing he meant @VirginAmerica] seems to care: lovely, apologetic email, full refund for flight, free tix offer – all before I’ve landed. I appreciate the gesture/effort.” In another update posted at 5:45pm Smith stated that Virgin America, “did EXACTLY what any corporation/company should do when their customers have issues with their service: they almost instantly self-corrected.

Although Virgin’s contract of carriage clearly states that passengers, “must be at the boarding gate at least fifteen (15) minutes prior to scheduled departure time,” that seems to be a pretty flexible. I know I have been running late and ran on a flight just minutes before departure time. If you look just at the rules, it looks like Virgin America had every right to deny Smith and his party from boarding, but that doesn’t mean it was the right call. I don’t feel that Virgin America just paid off Smith to make him happy; it looks like they did it since a few local gate agents stood by the rules a little too harshly.  However, with Virgin America being on top of social media, they were able to stop this incident before it got any worse.