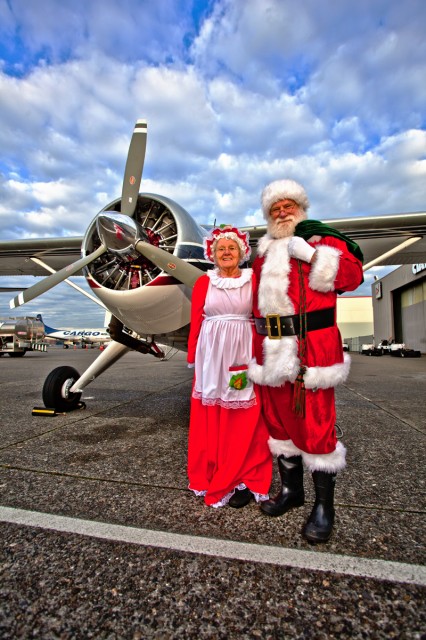 SEATTLESanta Claus ditched his sleigh Saturday and flew in a 1952 de Havilland Beaver.

The jolly Christmas icon arrived at this city’s Museum of Flight aboard a restored single-prop aircraft dubbed ’œSanta One,’ greeting eager children and their parents with Mrs. Claus on a visit from the North Pole.

Santa decided to travel by plane instead of his traditional sleigh because his reindeer are unavailable during daylight hours, he said, and also because they need to rest for next week’s midnight marathon around the world.

’œRudolph and Dancer and Prancer and the rest, they’re resting up because they’ve got a big night’ on Christmas Eve, he said. ’œAnd it’s daytime, and they can’t fly in the daytime,’ he said.

Santa and Mrs. Claus had smooth sailing on approach to runway 13-R at King County International Airport (KBFI, ’œBoeing Field’), whose tarmac abuts the museum, on a chilly, partly-cloudy morning. The clear air afforded the Christmas couple wide views of the Puget Sound region on their approach past downtown Seattle and the Space Needle.

Santa One passed by the downtown core at only about 120 miles per hour, according to Douglas DeVries, vice chairman of the board of trustees for the Museum of Flight and the pilot of Santa One. While that’s a minuscule fraction of the average speed of Santa’s sleigh, DeVries called it ’œrocket-speed for a Beaver.’

The aircraft’s 59-year history has taken it to Hawaii, the Sound region, British Columbia, and points north, said DeVries.

It was badly damaged in Hawaii while a production piece in the 1998 feature film Six Days Seven Nights, said DeVries. The plane’s cockpit was compromised, he said, and its starboard wing had folded back toward the fuselage.

DeVries purchased the aircraft from a wrecking yard in Colorado, he said, and spent six years restoring the plane to airworthiness. He replaced almost all of its fuselage skin, except for one piece of the original, which he retained as a memento of the plane’s former life.

He also gave it its new tail numberregistry N67DNas a tribute to the movie it had helped make, DeVries said.

Santa Claus could almost have hopped aboard the airplane in 2008 when DeVries attempted to fly it to the magnetic north pole. DeVries’ trip was hindered by an iced-over waterway at a refueling stop, which prevented the ski-equipped airplane from landing there. DeVries finished the 12,000-mile arctic trip, but he would have to wait to speak to the North Pole’s chief resident in person.

Such a meeting took place Saturday, with Santa and Mrs. Claus seated in the mid-cabin row aboard DeVries’ restored Beaver. Removing their headsets, the Clauses climbed out of the plane to the welcome of their young admirers, who had turned out in scores for their arrival at the museum. 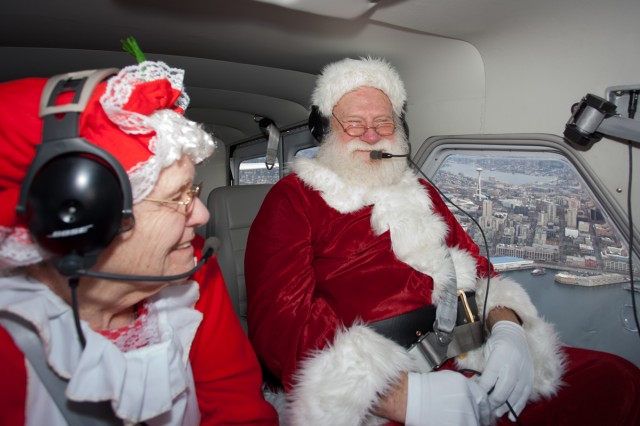 Moments later, the queue to meet Santa and Mrs. Claus inside the museum wrapped around much of the lower-floor exhibit. Elves in bright red and green ushered children forward to meet them beneath the cut-out USAir fuselage that forms part of the museum’s collection.

Santa’s helpers had been dispatched ahead of Santa One on an advance team, said Alexa, a 14-year-old elf, while ushering the long line of children awaiting their turn with Santa.

Alexa’s presence was ’œpart of an elf exchange program,’ she said. ’œI’m sent down here [from the North Pole] to make sure which kids are naughty or nice, and then I report back to Santa.’

She prefers Seattle to the North Pole. ’œIt’s always cold up there,’ she said. ’œYeah, I like snow, but I don’t like it constantly cold.’

News of DeVries’ North Pole attempt in 2008 made its way to the Claus workshop, said DeVries. ’œSanta heard that we were trying to get to his house three years ago in the Beaver,’ which helped inspire the Claus couple’s interest in stopping at the museum, DeVries said.