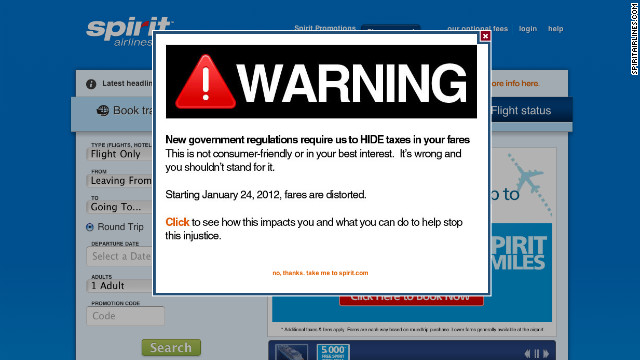 Spirit is not afraid to give their opinion about the new rules on taxes and fees.

If you have been on Spirit Airline’s website recently, you might have seen a big warning taking over your screen. The warning shows Spirit’s disdain for the Department of Transportation’s new fees and tax regulation that require airlines to include fees and taxes in their advertised prices. The warning states, “New government regulations require us to HIDE taxes in your fares. This is not consumer friendly or in your best interest. It’s wrong and you shouldn’t stand for it.”

Senator Barbara Boxer, D-California, is not happy with Spirit’s actions and has asked the airline’s CEO, Ben Baldanza, to remove the warning message off the website. Spirit Airlines is disappointed by the letter and spokeswoman Misty Pinson told CNN, “We would normally expect Senators to encourage 1st Amendment protection.”

“We have always shown taxes before someone purchased. They now want them hidden. It is wrong and we will fight for consumers,” Pinson said. Spirit is concerned that the government will be able to raise taxes without customers knowing and blaming the airlines for higher overall costs.

Why is the government targeting airlines? In most places in the US, you see a list price and know you will have to pay more (ie taxes) when you check out. Let’s take buying a car for example. It might be advertised as a $19,999.00 vehicle, but after adding taxes, licenses, dealer fees, interest and others, that $20,000 car ends up costing you much more than advertised. Why does the government feel the need to regulate the airline business, but allow other areas to do business as usual?

These new rules might not be permanent. Yesterday, Representative Tom Graves, R-Georgia, introduced legislation to counter the new rules. “If the American people can’t see these costs clearly, I fear it will be easier for these fees and taxes to be raised without their knowledge,” Graves said.

I asked some of my Twitter followers what they thought about the new regulations and Spirit’s reaction and I want to share a few reactions:

“As if raising fees is done in secrecy. Spirit has lost my support. Final price is the way to go,” @gusnyc.

“Seeing as taxes make a bulk of tix price for flying, it should be shown,” @MichaelLacek.

“I’d love for stores to show prices with taxes included. Shopping in sales tax-free Oregon is strange yet awesome,” @quanterium.

“Two flights advertised as the same amount but which “ring up” differently is bad for consumers,” @iansltx.

Ah, I think @amolkold might have hit the nail on the head. Spirit loves to talk about their $9 fare deals, which always end up costing more than $9 after all the fees and taxes. Having to add those fees and taxes up front wouldn’t allow the airline to advertise a flat $9 fare.

As a la carte pricing becomes more popular with airlines, it seems to cause additional anger with many passengers. Even with a growing dis-like for fees, passengers keep on paying them and flying on airlines, like Spirit, who are well known for their low prices and plenty of fees. If passengers truly hated the airline and their way of doing business, they would not be in business.

Of course, all this over-reaction could just be another publicity stunt for the airline. Spirit has been known to come up with crazy ads and stunts to get free publicity. Although I am sure that this new rule hurts the airline’s bottom line, it has also given them the opportunity to once again garner a bunch of free publicity (including from me).

No matter your thoughts on the new rule or Spirit’s actions, it is pretty interesting to see an airline that is so vocal about a law. Seems like this rule could still be over turned.

Spirit A320 Image by Justin Pistone